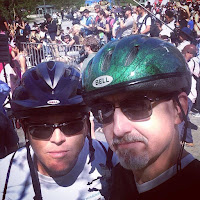 In the middle of last week, what seems like ages ago, this guy I know and I were watching the ball games at Jim Brennan Field in Forest Hill Park, Cleveland Heights. I was talking about changing up my exercise routine with a little cycling and he said he was thinking of riding his bike downtown during the convention, to check things out.

I thought this was a great idea, we’d be mobile i a way we could not trying to drive and park or by taking the rapid. I’d never ridden my bike downtown, though I have run across town when training for marathons. We made a date for Wednesday.

The first half was a familiar experience for me, only faster. Heading down Mayfield to Little Italy, I had my brakes on down the entire hill. I am not accustomed to propelling myself through the air with only a plastic helmet for protection. It has been a long time since I was a cyclist. 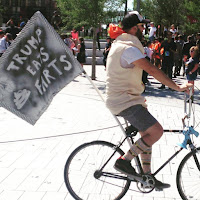 We took it easy through the cultural gardens and onto the Shoreway. I had suggested this route, rather than the more direct Euclid Avenue route he had suggested, because I noticed the city had just resurfaced North Marginal Road. I have run that road several times, and it is normally pitted and cratered. This day it was like like sliding on glass. Yay, public works!

Once we got to Ninth Street we had to figure out the best way to get to Public Square. Lakeshore was a Security Zone, and St. Clair. Passes only. Police officers were supernaturally polite in re-directing traffic. Superior was clear, and we rode past the library (did we really do a play there less than a week ago?) to the square, which was bustling with protesters, onlookers, officers, and a ridiculous amount of media. 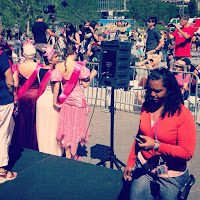 The media were the sketchiest looking people, because everyone else was clearly identified as to who they were and what they were doing. Some reporters had stations ID'ed on their mics or cameras, but many did not, and any guy with a camera on a selfie stick and professional-grade mic attached could be broadcasting images to absolutely anywhere in real time.

We watched a few staged events. There is a platform stage surrounded by barricades in front of the statue of Moses Cleaveland, what some participants like to refer to as the Free Speech Pen, for scheduled performances. Code Pink presented the I Miss America Pageant in which contestants shared all the things they missed or would under a Trump presidency. Trump himself was present in the form of a participant in a suit made of money with an oversized papier-mâché head. 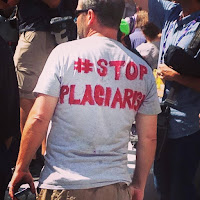 A team of protesters were handing out water, sports drinks, fresh fruit and handmade breakfast burritos, to everyone and anyone. We each had one of those, and though I would have asked for hot sauce had it been offered, they were really good, with a lot of egg, peppers and potato. They were also not poisoned or drugged. I know this because I am writing this blog post.

I witnessed one altercation which I had entirely misjudged, in which an organizer was getting into the face of a man in a suit, not exactly yelling at him, but he was heated. I have to admit, I assumed the protester was the aggressor, but when police intervened and quietly but forcefully walked away the man in the suit, I had to wonder just what the hell had happened.

However, while we were there, the events at Public Square appeared to be a well-organized, peaceful, if slightly disorienting event. People were getting their message out, would anyone care to hear them. 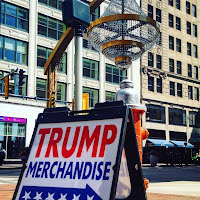 I needed to get back to take my son to an event back home in the Heights, and so Mark and I parted. He wanted to hang out a bit longer. I left just as a new team of participants in brick and chain link wall costumes were lining up to create one long barrier reading Wall Off Trump.

My friend recommended I try Euclid Avenue to save time, and I did and it was great fun. The bike lanes that start around East 30th Street are very helpful and though I made a few errors in timing I felt entirely safe. We took about an hour to get downtown, and it took forty-five minutes to get back -- and much of the last part was uphill. I wonder much more challenging the journey would be during a normal rush-hour commute. Perhaps I need to seriously take up biking for transportation.
Posted by pengo at 12:15 PM