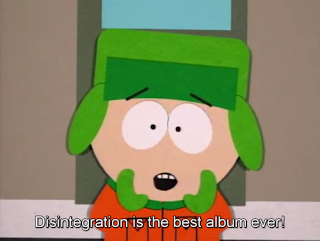 It is only correct that Taylor Swift was born during the greatest year in music history.

The longest period I ever lived alone, in my entire life, was for seven months during the year 1989.

I learned how to be calm in silence, to not speak, to enjoy thinking for thinking's sake, sitting on low stone wall in the outskirts of Lugo, Spain. I won't go into details, but I was there for perhaps four hours. It was maddening at first, but the weather was perfect and then I eventually realized that my best company could actually be myself.

It is not an opinion I hold by nature. It is not one I hold at the moment.

The summer of 1989 I turned twenty-one. My mother sent me a blender for my birthday, as a celebration of my first solely occupied apartment. I made frozen daiquiris at noon.

In that time I smoked, a lot - more than ever before or since. It was the only time I had ever bought a carton of cigarettes. And I wrote and I drew cartoons and I watched movies by myself. I couldn't really cook but I had learned one or two things (really, one, maybe two) living the past school year with two roommates who could and gave those a try.

And I listened to music, all the time. When I was napping or dining or creating. Earlier in the year when I was working on my first play there were stretches when I was on my own in the Little Theatre working on the set design, I would listen to albums on cassette, over and over again.

Were they really great albums? Was this actually a significant moment in time? Or was it just me? 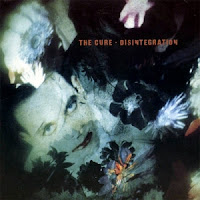 Disintegration - The Cure.  Finding it hard to believe this was only The Cure's eighth studio album as I already had dozens of CDs and pieces of vinyl from this group. It discovered them my senior year in high school with Head On The Door (largely thanks to Night Flight) and by the end of freshman year was dyeing my hair, wearing eyeliner and dressing like a goth clown.

Still, my entire Cure-thing always felt like I'd joined a party that had been over for a long time. Head On The Door was the poppiest LP they'd created, and the over-long Kiss Me, Kiss Me, Kiss Me was really an imitation of everything they'd already done. I couldn't imagine they would release another album that would interest me.

So when the first single from Disintegration was released, Fascination Street, with the lyric so let's move to the beat like we know that it's over, I felt a twinge of instant nostalgia. I'd never heard a song from them that felt so self-aware. The record includes their most sincere songs, far from the arch pose of most of their previous tracks.

Personally, I was a point where I had brought most of my horribly tangled romantic relationships to some kind of conclusion, for better or worse, and was left with a kind of resigned longing which was satisfied by songs like Lovesong and Pictures of You.

They were my love songs for no one. 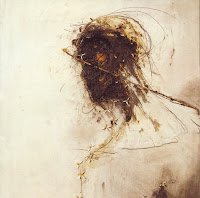 Passion - Peter Gabriel So was released weeks before I graduated from high school. His next album of pop songs, Us, wouldn't be released until the year we started Guerrilla Theater Company. In between he composed this soundtrack for the Martin Scorsese film The Last Temptation of Christ, inspired by authentic Middle Eastern rhythms and his usual drumming and howling.

Passion became a necessary component for every single dance recital performed anywhere for the next five years. The night before the Persian Gulf War was engaged in early 1991 many of us participated in an anti-war performance piece on the college green. Of course, the director and choreographer used a lot of music from Passion. It was 1991. I was disappointed, but hardly surprised.

I was very interested in seeing the movie, a movie which was controversial at the time. People protested this retelling of the life of Jesus, emphasizing his humanity. I was not a believer, though I had been. I knew the Gospels. I was not then nor am I now an atheist. I believed what I had been taught as a child, I had a sequence of girlfriends in high school with whom I engaged in passive aggressive, Christian guilt-and-shame babble, and by the time I was eighteen, it just wasn't there, like it never had been there.


But I have a deep interest in myths, fables and legends. On a cool August night, shortly after the movie was available on VHS, I walked to the video store, picked up some Chinese take away, and sat in my basement apartment to watch a movie with the windows open. I was probably drinking Southern Comfort. I know I was smoking.

I found Last Temptation very long, surprisingly witty, and even moving. As the tape rewound - not making this up - my mother called to inform me that my grandfather had died. He'd been suffering for almost a year. I was relieved to know that, for him, at long last, it was finished. 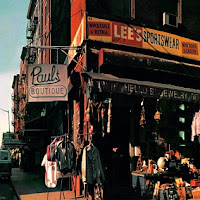 Paul’s Boutique - Beastie Boys Their arrival was perfectly timed. As a mullet-headed, hanky-headed, dickhead freshman, Licensed to Ill was an ideal soundtrack for playing Ultimate by day and learning exactly what my limits for drinking Johnny Walker Red were at night. The only time I saw the Beastie Boys live was over spring break at the Public Hall in 1987. It was unforgettably stupid but also AWESOME (did I mention the opening act was Fishbone?) and I entered my first mosh pit.

In the time it took for them to go through all those things we now know they went through to create a second album, like a lot of people I had moved on. It was hard to be taken seriously as an someone with taste and admit you liked the Beastie Boys. I mean, I still did. But I wouldn’t play it back at the apartment, my roommates wouldn’t have it.

However, I was excited when there was a poster in the window announcing THE HIATUS IS OVER and immediately picked up this bizarre-looking, yellow cassette with the black, 70s era label. The entire summer I kept it running on auto-repeat in the boombox sitting in the passenger seat of my car.

We were right. We knew we were right. There was something special about these guys which transcended the knuckleheaded bullshit of their first album. I was soundly mocked by the company at summer theater for indulging in this funky masterpiece, and wrote out the lyrics for Hey Ladies so that the few of us who got it could rap along - real loud - while we were catcalled by our cast mates.

The whole retro-funk sound of Paul’s Boutique laid the groundwork for all that Gen X nostalgia pop of the mid-90s. And now they’re in the Rock Hall. You see? I have never been wrong about anything.