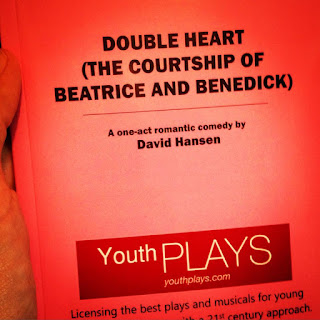 Double Heart (The Courtship of Beatrice and Benedick) was recently published by YouthPLAYS, and is available for production.

For more information check out the Double Heart page on the YouthPLAYS website. 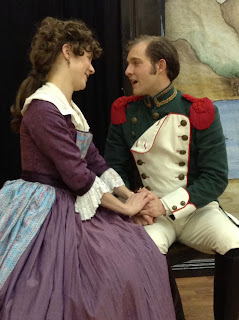 Double Heart imagines two of William Shakespeare’s most beloved characters, the quick-witted lovers Beatrice and Benedick, as they may have first met as impetuous, young teenagers. A brash young soldier (Benedick) meets a young lady with an independent streak (Beatrice), and they quickly learn to see each other as equals among fools. Their relationship deepens until world events and war intrude and hearts get broken.

Written entirely in verse, this Shakespearean “prequel” features dancing and swordfighting, and walks the line between romance and comedy..


“Beautiful turns of language and a touch of weirdness.”
- TIME OUT NEW YORK

"You don’t have to know a thing about Much Ado to get a major buzz from Double Heart ... The language is funny and at times quite elegant and wise about issues of the heart."
- RAVE AND PAN

YouthPLAYS is a publisher of award-winning professional dramatists and talented new discoveries. They license one-act and full-length plays and musicals, including works both for teen and pre-teen performers, as well as adult actors performing for young audiences.
Posted by pengo at 5:36 PM