Odd years are normally my favorite, and certainly the most productive. This isn't a fact or anything, just a subjective opinion.

My written work continue to spread like a an ultramicroscopic, metabolically inert, infectious agent that replicates only within the cells of living hosts, with odd productions of Agatha Christie's The Mysterious Affair at Styles popping up at high schools and church drama clubs.

Whether or not Acorn would allow foreign productions of Styles was put to the test this past year, and they will not. Certainly not in Britain, where they retain copyright to the book which is in public domain in the US.

Just this last week there was a performance of I Hate This at the Lowry Theatre in Manchester, and shortly thereafter I found this very interesting blog post from a gentleman, Paul Kleiman, who attended the performance and participated in the post-show discussion.

He noted that John Dayton, the actor, was brought on board perhaps a month prior to the October 15 performance and so it was decided he should hold book. Instead of being a distraction, Kleiman suggests that holding a document and reading from it provides an appropriate distance from the production - we know this is not David Hansen, we are not going to pretend it is. This actor is interpreting his experience.

I am reminded of the play 8, which was produced one night at Cleveland Play House last year. Taken from court transcripts, holding book was a necessity of the brief rehearsal period, but also reminded the audience at all times that this was not fiction, that these are the actual words that were spoken in open court, and in interviews.

As for the upcoming year, I have at least two new works that will be produced in Northeast Ohio. 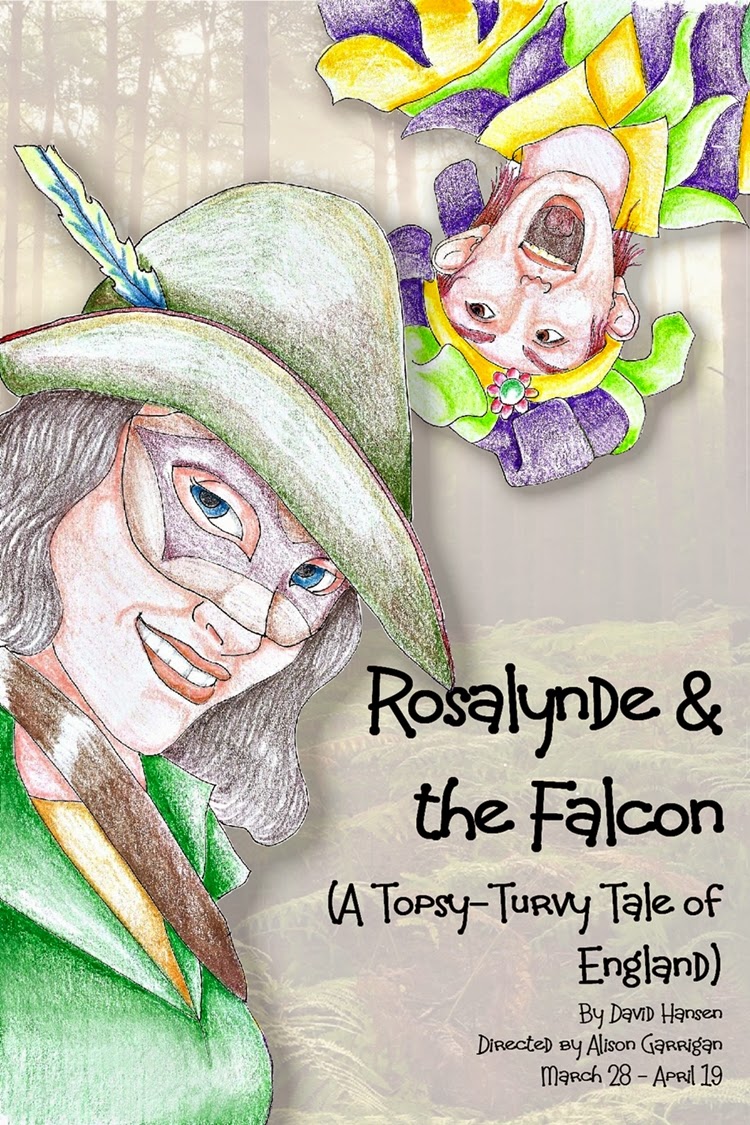 Rosalynde & The Falcon will debut at Talespinner Children's Theatre on Saturday, March 28. This is my second collaboration with TCT, and I am very excited to be working with them again. I have loved everything this company has produced, and am constantly amazed at their dedication to every moment and detail of each production.

For this piece I was inspired primarily by Shakespeare's As You Like It, and also its source material, Thomas Lodge's Rosalynde, which was itself by the anonymously written, Medieval age Tale of Gamelyn, and all those folk tales that involve threatened women driven into the woods where the have adventures, meet strange men (dwarves, thieves, bears, what have you) and discover strong, important things about themselves they would never have learned at home.

It's also written entirely in trochaic octameter, but don't let that bother you.

Interestingly, another new play will debut on the exact same stage, at the beginning of the month. This year's free Great Lakes Theater outreach tour The Great Globe Itself opens Tuesday, March 3 in the Reinberger Auditorium, home to Talespinner Children's Theatre, before moving on to another 26 venues around northeast Ohio.

In brief, Globe describes with playful humor how the history of Shakespeare's Globe Theatre is a line which runs straight through Cleveland. But you have followed this blog long enough that you already knew that.
Posted by pengo at 12:57 PM

Email ThisBlogThis!Share to TwitterShare to FacebookShare to Pinterest
Labels: 8 (play), Back to the Future 2 (film), I Hate This (play), Rosalynde & The Falcon, The Great Globe Itself, The Mysterious Affair at Styles