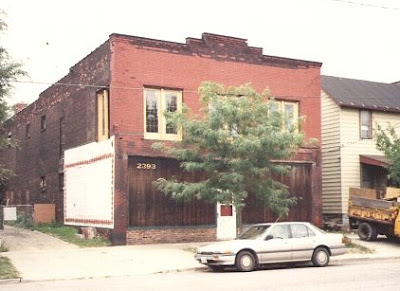 
Guerrilla Theater Company lasted two years, in two locations along Professor Street in Tremont. We had disagreements with our first-year landlord, and were happy to move into a location just a block away which had more space in which to perform, including something like a lobby.

Unfortunately, what we named The Actors' Gym was rather plain or ugly from the outside. Unlike The Professor Street Theater there were no ground floor windows, nor even a nearby lamp post. We jerry-rigged an exterior light and that was it. At night -- when we did all of our work -- the facade was rather foreboding and I know for certain of at least one person who was in high school at the time, deciding to "slum it" by checking out some cutting-edge comedy in the g-e-t-o, took one look at the place and decided it wasn't worth it.

Prior to our occupancy, the space had been an actual gym. There was shag carpeting in the main space, gang showers upstairs and down, and even a sauna. The landlord allowed us to work off some rent through sweat equity, ripping up layers of carpeting, thick plywood, all-weather carpeting, and linoleum, before reaching the original oak flooring.

The lobby was rather bizarre, with a nautical theme ... wood and ropes and salty-dog wallpaper. The coved ceiling was stuccoed.  To the left of the front door there was a counter with a display case built in and a wall behind and to the side with cubbyholes, which we used as a box office.  To the right, another display case, and two small alcoves that could act as a coat check or a tiny office.  And directly in front, a raised platform with railings around it, a kind of display area.  We left the lobby as it was, didn't change a thing. 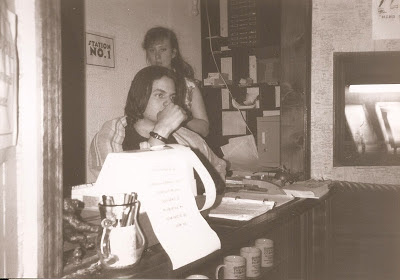 The other day, after supervising some of our actor-teachers and giving notes and running lines over lunch at Grumpy's, I decided to give one of our newest members, raised in Chicago, a brief driving tour of this most interesting neighborhood, which had only started its gentrification twenty years ago. 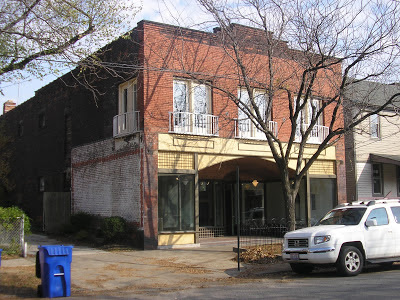 
Approaching the former Actors' Gym I hollered, gaped, and pulled over. I couldn't even believe my eyes. Guerrilla wasn't my last experience with this space. Since then Bad Epitaph produced two shows there, when it was the art gallery called INSIDE and later *. In early 2001, my wife, very pregnant with our first child, performed in a show for J.P. Morgan's short-lived Radical Evil Drama company. But the facade was always the same, ugly paneling and no windows.

1989 Loma Prieta earthquake scene from Bad Epitaph Theater Company production of SIN by Wendy MacLeod at INSIDE, Cleveland, OH. September 1999. The performance space was tiny, the audience was limited to 40.

To create a realistic earthquake, the seating risers were cantilevered, one bank resting slightly on the one beneath, with large bass speaker cabinets lying on the floor beneath the audience, directed up. Actors on the still, hardwood floor throw themselves about as the set comes apart, but the audience was literally shaken by the sound, as in an amusement park ride.

What had never occurred to me was that the lobby was once an alcove. But of course it was! Stripped away, losing all of the crappy display boxes and adding high windows, the space is now an attractive show place. 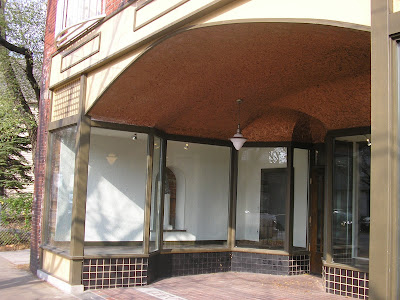 You can ask Andrew. I was practically crying, it's so beautiful. 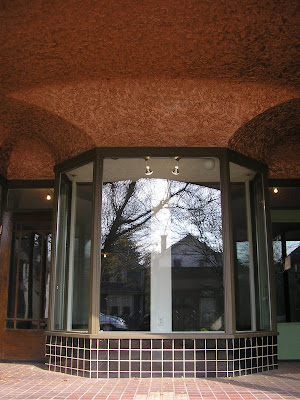 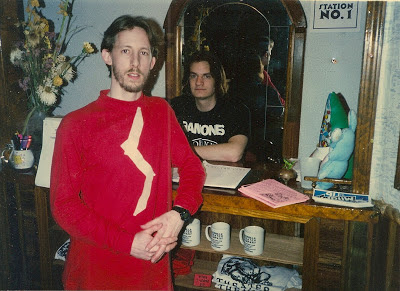 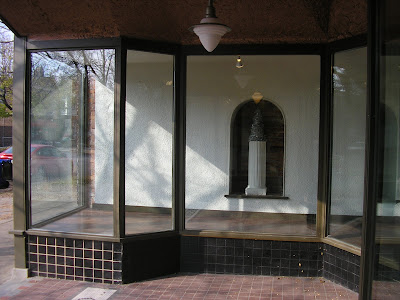 Peeking into the space, there has not yet been any renovation inside the space. Just those hardwood floors I participated in discovering nineteen years ago. Signage indicates that the new owner is now in the public phase of attracting backers for a New Orleans themed restaurant.

Driving my young associate around the neighborhood, and describing what it was like two decades ago, I became excited for the city all over again. Tides rise, they ebb. But I still feel that we are moving forward. 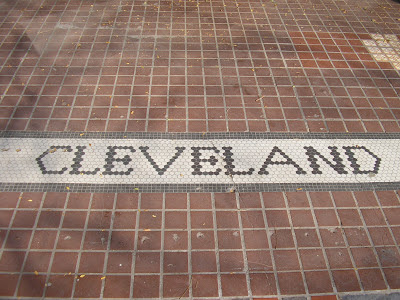