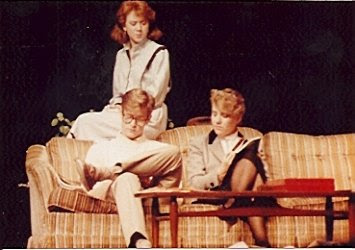 The very first time I directed a show was senior year in high school, Living Together by Alan Ayckbourn. There were three performances on a Thursday, Friday and Saturday night in early 1986. Opening night I sat in the middle of the house. There was a point during the beginning of the second act where Norman (Steve Pack) was splayed out on the floor, intoxicated, and someone could not remember their line.

I do not know who it was, and even if I did I would not rat them out here. But for a long, awkward moment two or three actors stood over him, looking down, none of them saying anything. My heart was beating in my throat, and the next line was on my lips. I had never been in this experience before, and I did not know what to do. I could have blurted out the line myself, "prompting" them, but I thought that would suck terribly, if I did that. So I didn't. Someone jumped to the next cue, the scene continued. That horrible moment was over, and there was not another like it during the entire run.

It is odd to think that my company for Henry VIII last performed that show a week and a half ago, not to perform it again until this Saturday night in Mentor. The other night I had a dream that this next performance was actually in a theater (not outdoors) and probably my high school stage. Just as the Queen's Vision was to begin, one of the Cleve Shakes company members - not an actual company member, I have no idea who she was supposed to be - wearing a tank top, cut-offs and flip-flops ran out onto the stage with a styrofoam cafeteria tray.

It was a segmented cafeteria tray, but not an ordinary cafeteria tray, this one was about the width of a picnic table. It had on it a grilled sandwich, about the size of a small child, and some enormous kettle chips. This intruding stagehand began to roll the sandwich in the chips. Then she got on the tray and rolled around on the tray herself.

I have no idea what the symbolism is here, all I can tell you is that she was ruining my show.
Posted by pengo at 1:12 PM