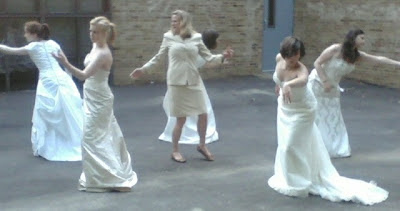 The Famous History of the Life of King Henry VIII - Act IV, Scene 2

The vision. Enter, solemnly tripping one after another, six personages, clad in white robes, wearing on their heads garlands of bays, and golden vizards on their faces; branches of bays or palm in their hands.

They first congee unto Katherine, then dance; and, at certain changes, the first two hold a spare garland over her head; at which the other four make reverent curtsies;

At which, as it were by inspiration, she makes in her sleep signs of rejoicing, and holdeth up her hands to heaven: and so in their dancing vanish, carrying the garland with them.

Just prior to her death, the Queen Katherine -- now divorced, living under the title "Queen Dowager" -- has this vision of six women, presumably of the Six Wives of Henry VIII. 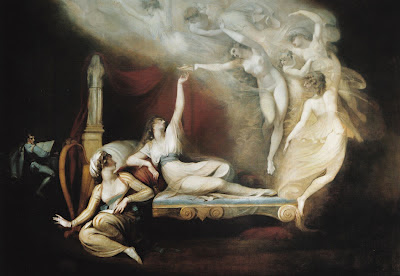 What does it signify? Katherine calls these ladies "a blessed troop":


Whose bright faces / Cast thousand beams upon me, like the sun?

They promised me eternal happiness / And brought me garlands

Which I feel / I am not worthy yet to wear.

They are kind, welcoming figures, heralding her to her final reward. Not adversaries. Not even Anne Boleyn. After all, who has the power in this situation? The King, who breaks with the Catholic Church to get what he wants.

The wives of King Henry VIII had an obligation -- not to him, but to England. To provide a male heir. So went these women's work. A procession of women, one of whom was seriously mourned by the King, only she who died in the process of birthing the only son who lived into childhood.

Denied her rightful place as Queen, an honor she treated as her vocation, Katherine is comforted by the women who will follow in her footsteps. It is one of two accurate visions of the future presented in this play. For our purposes, I desired Katherine to be of the six, not apart, not merely watching. She plays herself in this vision.

The Queen's Vision - a rehearsal

Choreographer Sarah Claire joined us this evening, and in two hours staged a remarkably large part of what will be a four-minute dance. The pieces come together. We open in two weeks.
Posted by pengo at 11:50 PM