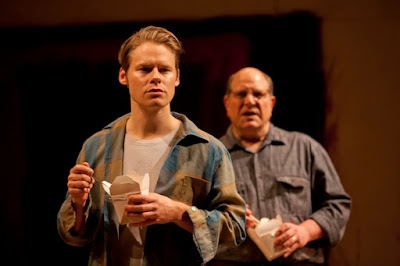 The wife and I went to see the Cleveland Play House production of RED at the Allen Theatre on Wednesday. My memory of the Broadway production were still strong, and I was looking forward to rediscovering it. The wife enjoyed it a great deal, leaving the theater with her head swirling. My original take on the script was that it wasn’t as powerful as it might have been, against the towering, brutish character of Rothko, assistant Ken (on paper) came across as the idea of someone who might exist, rather than anyone who actually does.

The most powerful impressions of when I saw it in 2010 was Molina’s subtlety of humor, the strength of his fragility, and the design -- the sound, the set, the light, and the paintings. Especially the paintings. As I found each of these elements wanting in this incarnation, the script came to the fore as the real star of the show, and I respect it a great deal more. And I actually thought Randy Harrison’s Ken was an improvement on the original,* pushing what I had previously dismissed as a requisite painful backstory into something necessary to the narrative.

I believe now that RED could be, and perhaps some day should be, performed with little or no set at all -- and none of Rothko’s paintings. The Broadway and CPH sets were almost identical, a realistic painter’s studio. On B’way, however, every scene featured a different Rothko, upstage, looming over the proceedings. When either player described the work, we could see it, but the paintings kept changing. After all, the artist is supposed to be creating over thirty different large-scale canvases. At the Allen we got one main one that stays for several scenes, a few others to the side which had to be viewed from a severe angle (Rothko would not have approved of that) and of course, the blank canvas that gets primed right before our eyes, a neat trick which is thrilling the first time you see it. 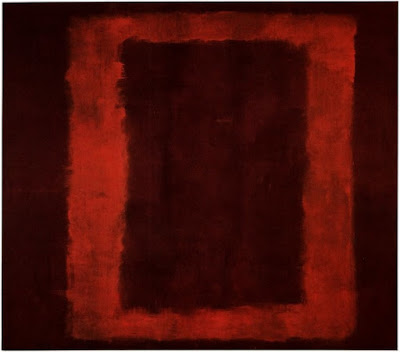 Most missteps in this production were directorial. The most glaring of which was choosing to put on painting on the “fourth wall” -- a painting wee do not see, because it is hung on the proscenium, invisibile to us, with the actors looking out at us to see and comment on it. At one significant moment, Rothko is inspired TO PAINT! He instructs Ken to bring him paint, to add pigment, Rothko is massaging a brush … what can be going on int that man’s head? In New York, he was facing upstage, at an actual canvas, one he has already informed us is unfinished, and in that moment, we, the audience, are thinking the same thing … Is he going to PAINT? What will he PAINT? Is this really going to HAPPEN?

It is an electric moment of possibility, which I will tell you goes unfulfilled, with an explosion of anger and regret. However, in Cleveland, he was facing us, the audience. There was no actual canvas. Is he going to paint? Of course not, don't be silly, there’s no canvas there, dummy, there will be no painting.

These is one of those moments in the theater that I recall the voice of Roger sitting next to me in the audience, when I am so fortunate to attend a show with him, that he hear him mutter under his breath, “Bad choice …”

He does that a lot during other people's plays.

Directorial choices notwithstanding, it was in large a great night. And we had plenty to talk about on the way home. Because these are the stories I love the best. Stories about artists, and about the act of creation. Those are the plays I enjoy, and the films, about writers and painters, about designers and even about chefs. 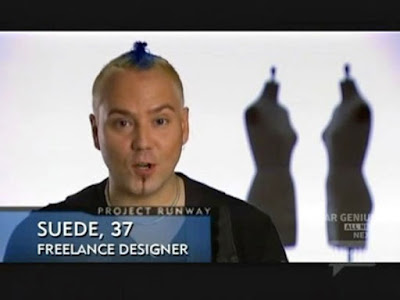 My favorite movies include The Moderns (painting) Ed Wood (moviemaking) Big Night (cooking). This is why I enjoyed the first few seasons of Project Runway, to my own surprise, because it was about watching designers realizing their ideas. It’s why I can’t watch it anymore, because the producers emphasize headgames and physical exhaustion and the work is terrible. 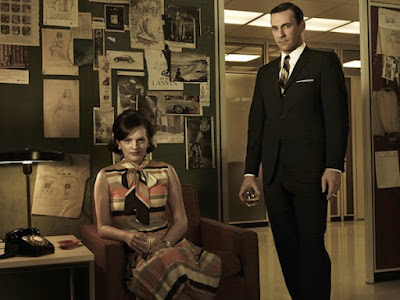 We are currently trying desperately to catch up on this thing Mad Men. We started season two last night on Netflix. Now, I won’t pretend that my primary interest is not the same as everyone’s; the style, the music, the smoking and drinking, the dream that someone like Jon Hamm could actually walk among us.

But it’s also about ideas, and about creativity. About using art and words to shape emotions and to change the way people think. Sure. It’s about advertising. About selling stuff. And we can have a lengthy discussion about the difference between selling a philosophy and selling deodorant. The point is, I am drawn to stories that play out discussions and actions, the negotiation between people, to create art.

My wife and I were winding back through the previous season, I was trying to piece together how Peggy came to where she is at this point. The show takes its time, there are few sudden leaps in any direction for any of the characters. So, how did this reserved, plain-looking woman, get the attention of someone with as much power and ego as Draper. It may have come as a surprise to some that this meek woman wants something, we all do, we all want something. But there were clear lines at that time, and she crossed them to get where she wanted to be.

Then my wife reminded me, she was in the sample pool for lipstick. She was able to tell Don that in order to “understand” a woman, you should ask a women. Now, in the episode we saw last night Peggy uses the tired phrase “sex sells” and Don calls her on it. That’s not why he hired her, so that she could talk like just another man.

But he didn’t say it like that. He said it better than that. Because he’s Don Draper. And you don't even know you are. 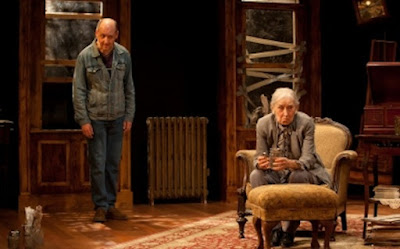 Some who have witnessed The Velocity of Autumn at Beck Center have remarked about the manner in which art acts as a bridge between the estranged mother and son whose story it is. And this strikes me as odd, not because it is not true. I guess it is. As the person playing the son in question, I am so embedded into the character, getting from point A to point Z, I am not thinking of the larger how of how we communicate. It's just me and my mother, trying to reach each other, and not knowing how. And she paints, professionally. Or used to. My character is a searcher, a watcher. A life-long student. I hadn't thought of how it appears to others.

UPDATE 7/25/2019: The "original" Ken on Broadway, whom I was apparently so unimpressed with, was Eddie Redmayne.
Posted by pengo at 12:01 AM