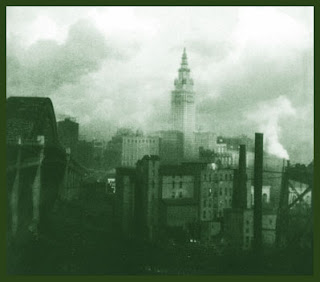 Completed in 1930, the Terminal Tower was the tallest building outside New York City in 1936. It was built by the Van Sweringen brothers to serve as an office building atop Union Terminal. "The Vans" also owned the rail ... and the land at the far end of the rail system in Shaker Heights. "Work here in our building during the day, and take our train out to our homes away from the city at night."

Trawling the Internet for colorful language about the Terminal Tower, I found this tasty, torso-related paragraph ...


This was the ugliest part of the city, filthy from the black soot of the coal fires, overpowering in its sulfurous stench, and strewn with trash and industrial waste. Almost symbolically here, too, was the dumping place for the city's human refuse, the thousands of men who once lived in rural Ohio, West Virginia, and Indiana, made homeless by the Depression. This inexhaustible supply of unwanted labor, "hobos" as they were called, rode the freight trains into Cleveland, looking for nonexistent jobs in the mills. There in back of the splendid Terminal Tower, the hobos camped in squalid, corrugated metal shacks, creating a city of their own. -TruTV.com

Other Sources:
The Design Rag
Posted by pengo at 9:26 PM