Free For All (book) 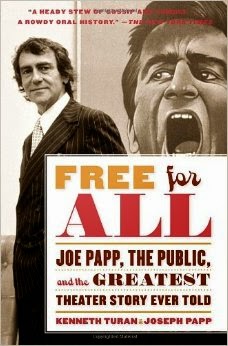 "I could have killed Clive Barnes if I'd seen him in person ... there are times you feel that way. You would actually commit an atrocity because the feelings are so intense."
- Joseph Papp, Free for All: Joe Papp, The Public and the Greatest Theater Story Ever Told

On one occasion, when New York Times theater critic Clive Barnes gave a thoroughly negative and condescending review of the Public Theater's world premiere production of David Rabe's In the Boom Boom Room ("Oh dear. Let us hope that the Shakespeare Festival will have better luck next time.") artistic director Joe Papp phoned him at home after midnight to tear him a new one.

This is a fact which is corroborated by each party in Kenneth Turan's fascinating account of Papp's tenure as the creator and driving force of the New York Shakespeare Festival/Public Theater, Free For All (2009).

Let's parse that. Imagine you are a writer. You love theater, that's why you have made your career watching it. You eat, breathe and sleep theater, the way others immerse themselves in commerce, or construction, or craft. In fact, you are fortunate enough to see all theater available to you. You aren't some suburban academic who had a sideline making a couple bucks writing theater reviews for a local paper with a subscription of a couple thousand. You see everything, everywhere, around the world.

In the privacy of your home, the phone rings in the dead of night. That's the time when I expect either a wrong number or to find a close relative has died. Instead, in your torpor, the producer of one play you reviewed needs very badly to insult you at length, to in fact threaten you with violence.

After all, it wasn't as though Papp hadn't already lost his shit on Barnes. By his own admission, Joe Papp put Clive Barnes against a wall once. So what if he was Joe Papp, admired by hundreds of artists and thousands and thousands of New York audiences. Does he have the right to harm a writer for doing his job?


We now will speak in defense of critics.

Theater critics are people who write articles for publication about theater. Sometimes they are critical evaluations of theatrical performance, or news items about same. These essays can be published in a print publication, or online, or both.

Like them or not, like how well-written they are or not, like what their artistic point of view is or not, these are the writers who, by choice or design, professional or amateur, write about live theater. No one else does that.

Without their efforts, no one outside of the theater world would know live theater still exists. These are the people who report on theater.

You might think, what right do they have to criticize the work? Well, none, actually, there is no right to criticize. But they do it, anyway. Some are educated, some are not. Some are pretentious, but so are you.

Some have a deep history of theater knowledge - and of local theater knowledge, which is much more irritating - while others do not. Artists pick and choose whether or not this is a blessing or a vice, depending on what has just been said about them.

We have our favorites, and there are those we make fun of on Facebook. Often. One in particular, he's a clown, but seriously. Without these few, these miserable few, there would be absolutely no one writing about the work we do.

We cannot ask for better because there is no better. We have several fine, thoughtful, opinionated, clever, diligent theater critics in our struggling metropolis. There are also a few cranks, but believe me, I have read many Cleveland area theater reviews, in the Plain Dealer and the Press and the News, dating back decades and decades, that were as bad as those written today.

It is my opinion that it is unnecessary to write to a letter to the editor of a paper with a daily circulation of 45,000 to demand the head of the theater critic. You sound like an idiot.

It is unwise for a member of a small budget theater company to place a private phone call to the editor-in-chief of a weekly tabloid to complain about one article written by the theater critic. The editor will only tell the critic about the call and they will laugh at you.

It is unimaginable to picture an artistic director - even one as important as Joe Papp - physically assaulting a theater critic.

Okay, not that is not actually unimaginable, not in Cleveland, but still.

I just read an entire book about this man, one of the most important figures in the history of American theater, and that's what stuck with me. To this reader, that is his epitaph.

They are critics. They are writers. They have no agenda, and they also have no power. They ain't your marketing department, they don't work for you. They cannot make your show live or die, certainly not today, not in Cleveland. That's your job.

Email ThisBlogThis!Share to TwitterShare to FacebookShare to Pinterest
Labels: Free for All: Joe Papp, The Public and the Greatest Theater Story Ever Told (book)