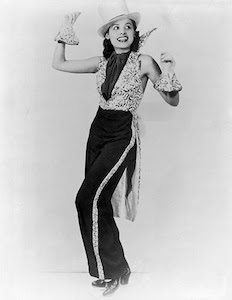 Lena Mary Calhoun Horne (June 30, 1917 – May 9, 2010) was born in Bedford-Stuyvesant, and raised largely by her grandparents. Her family, with roots African, European and Native American, was part of the "Black Bourgeoisie" a stratum of well-to-do people of color. Horne's own parents were looked down upon by the extended family, her father a numbers runner and her mother a traveling actress.

She spent time in the South with her mother, and later with her uncle Frank who became an advisor to FDR. Returning to New York she attended a public high school before leaving school without a diploma. At age 16 she joined the chorus of the Cotton Club, yes she did, and by 1934 had a featured role in the Cotton Club Parade. The next year she began touring with Noble Sissle and his orchestra.

According to BlackClassicMovies.com she headlined with Sissle under the name Helena Horne because he thought Helena sounded "classier" than Lena. However, when they played The Palace in early October, she was billed as Leona Horne.

Noble Sissle, who left Central High back in 1912 for the war and later success down the dance lanes, isn’t the only local-boy-makes-good at the Palace tomorrow.

The habitues of the Cedar and Central Avenue hot spots will remember Billy Banks. They swore by this lad a few years back as he danced and sang his way up and down the town’s Harlem.

Included in Sissle’s “Savoy Stompers” revue are the dancing stars of the Harlem Cotton club, “Pops and Louie”, Leona Horne, songstress, and Buddy Doyle, who comes out of the band to clown, figure prominently in the show.