On the Dark Side of Twilight: Olde Towne Hall Theatre 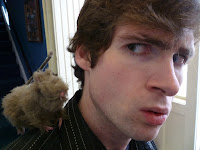 I think we may have set an attendance record for the outreach tour at Olde Towne Hall tonight. Over 70 people turned out! And what an incredible mix, kids and teens and adults young and old, it was incredible. And they were excited for an evening of vampire fun, let me tell you.

I don't know who started it, them or us, but there was a silly energy in the air. When I start "hypnotizing" Maria in the second arc, Emily got all sleepy and bedroom-eyed and I almost lost it.

During the Nosferatu segment, I actually drooled blood down my chin. 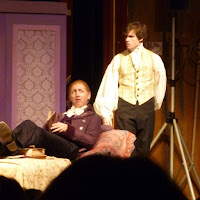 And Dusten was on freaky-fire, his timing was great all night but by the final scene, he was just milking it, and I mean that in the best way possible. He's never had so much sex in his voice when he's telling Lucy how much he wants to cut her and drink her blood. He's also never sounded so stupid in the final scene.

I don't know if we are giddy with all the touring or if we are finally relaxing into our performances. I think each of us are trying to get everything we can out of this show before it closes on Thursday.

Dynamite crowd, great discussion afterward. We ask (sometimes) why the vampire remains a compelling figure, and several times, including tonight, the "bad boy" thing comes up. But there was also some discussion after we all broke for punch and cookies about theology.

Someone at LAK had asked why there was so much talk about God in the third arc.  And then, of course, Michael was asking about comparisons to the Eucharist on Sunday (thanks for that, Michael.) 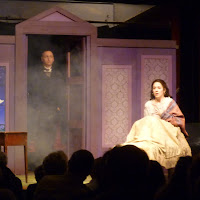 Today I had a nice talk with a man following the show who wanted to know if I were a person of faith; if I were Christian, to be specific. What happened on stage tonight made him feel as though I were. The way issues of faith were handled, he assumed I was. This comes to me as a relief, because though this is a satire, I am not really comfortable with denigrating or demeaning anyone's faith. Anyone's.

It's almost embarrassing the amount of help we have received lately, loading out the set. But I am grateful for it. We had GLTF company members, and students from Elyria Catholic who returned to see the show again, helping us lug everything down the big staircase. I am too wrung out and sore to say no.

Wow. This tour has been so much fun, I can't tell you. Did I mention we were performing on the set of Oklahoma?
Posted by pengo at 12:00 AM

Email ThisBlogThis!Share to TwitterShare to FacebookShare to Pinterest
Labels: Great Lakes Theater, Olde Town Hall Theatre, On the Dark Side of Twilight