On the Dark Side of Twilight: Akron Public Library, Northwest Branch 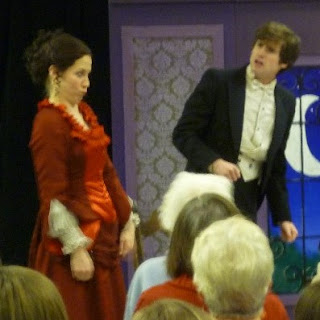 It is usually a 1 PM performance and there are traditionally a number of seniors, members of reading groups, and maybe fifty or so high school students from Firestone who can't attend the performance we do at their school. That performance is tomorrow, that is our last performance of On the Dark Side of Twilight, period.

Today was good. There were odd things happening, my voice cracked at one point, Emily fell down backstage, and Dusten's Eddie just keeps getting dumber.

A woman came up to me after the performance and told me she doesn't like vampires, she doesn't know anything about vampires, but she liked the Chekhov plays last year so much that when she heard I was in this she just had to come. That made my afternoon ... and my afternoon needed making because I had a sinus headache sending a spike into my left eye.

One more performance, tomorrow. It's been an incredible run.
Posted by pengo at 12:00 AM

Email ThisBlogThis!Share to TwitterShare to FacebookShare to Pinterest
Labels: Akron Public Library, Great Lakes Theater, On the Dark Side of Twilight