On the Dark Side of Twilight: Firestone High School 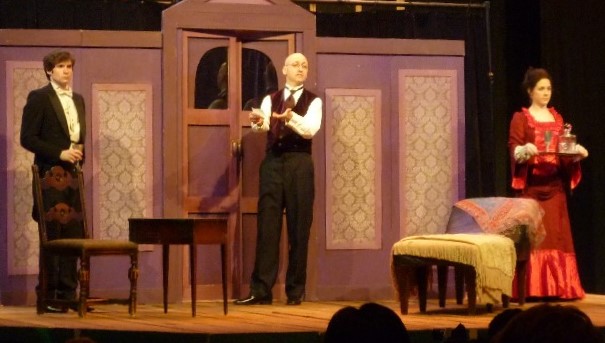 We closed today, our final performance was at Firestone High School. Always a favorite of mine, Mr. Z. has a vast number of dedicated performing arts students. Only "VPA" students (visual performing arts) are invited to the outreach tour performances, but at a school this size that still means we have at least 150 people in the audience. And they always get the real obscure stuff, too. There's a Winter's Tale reference in Dark Lady of the Sonnets and theirs was the only venue that got it. 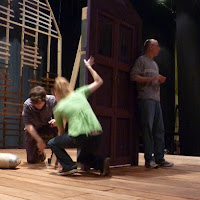 Sure, it was early. 7:30 arrival for a 9:15 performance, but really, we had this down to a science. Until we discovered that their set for Sweeney Todd (opening next weekend!) was already built ... with a raked stage made of planks with half-to-three-quarter inch gaps between them.

Now, our set has been a little wobbly on the best days. Slamming that door made the whole set shake, gave it a real "Ed Wood" feel. But placing it on an incline seemed downright disastrous.

So we took every bungee cord we had, and strapped the thing to the floor. The spaces between boards was actually a benefit. We also got a number of extra stage weights from the school, and don't you know, the set was more secure than it had ever been, seriously solid. 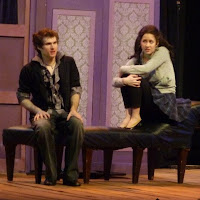 Many students assisted getting everything together and tearing it apart. In between, it was a rollicking performance, the three of us were really pushing it for our final go-round. I think we even made some very wise discoveries. Hate doing that on closing night. Morning. Whatever.

The post-show discussion was very interesting, and went on for a while. What has been most interesting about these talkbacks was the opportunity for people to quiz the playwright, about writing, about rehearsing with the playwright there, editing, the future of the production, and so on.

A number of the students picked up on some of the minutiae of the play, about the conceit of using "found documents" (see: Dracula) the setting for the interview (see: Interview) even the origin of Lucy's name in the final arc (see: Dracula.)

After the show, Dusten, Emily and I had burgers at the Winking Lizard, and then it was off to dump the set and props, store all the education department materials, and return the van. And today was a beautiful, seventy degree day. The end of the tour always means the beginning of spring.

I am really going to miss this one, a lot. 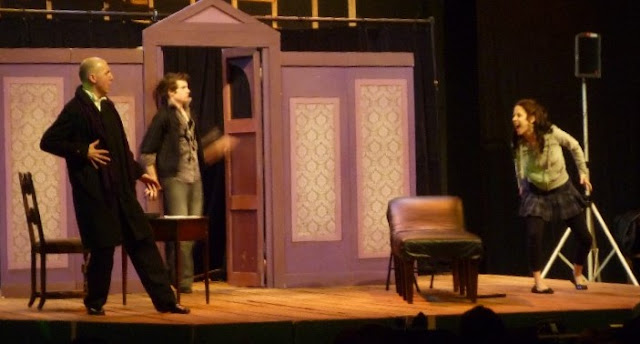 Email ThisBlogThis!Share to TwitterShare to FacebookShare to Pinterest
Labels: Firestone High School, Great Lakes Theater, On the Dark Side of Twilight