On the Dark Side of Twilight: Fairview Park Public Library

"This is a very old table."

That is what I said before launching into the second arc. After being attacked, Young Porlock hit the table, as usual, and the same leg that busted yesterday collapsed. The books and everything hit the floor. Lord Darvell did not even deign to look at the destruction. Hang Poor Porlock, bleeding on the divan, he had crushed our beloved table, and there was nothing to be done.

The Narrator brought out the sound case, and put the table onto that. It was too important to simply haul off-stage. There was too much at stake.

The major piece of the table I restored yesterday is still stuck firm, but that leg ... I have reattached it with wood glue and the clamp (which had been relocated for the larger damage and then set aside) and it may see another performance. 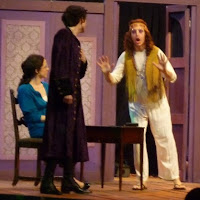 The crowd at Fairview was very nice, though strangely low on Twilight fans. I mean, I was really surprised. But the folks there have always been very supportive and the turnout was high.

Margaret led her first post-show discussion tonight, and it was really great. It went into some new places, especially into the sanguine. It is so weird that Bella (in the novel Twilight) describes Edward's breath as smelling sweet. He eats blood, that is his diet. It doesn't matter that it is animal blood. Have you ever been hit in the face? Had dental surgery? Have you ever had am amount of blood sit in your mouth? You know how it tastes? How it smells? Now imagine that is what you eat. Stoker nailed it with his description of Dracula's personal hygiene. Sweet his breath was not.

A woman came up after and asked me about Kent State. She wasn't critical, she just wanted to know why The Interview has references to historical events in the way the other three do not. None of these events are mentioned by name, not specifically. But if it weren't obvious, she was struck by the reference to "13 Seconds." I did not know that was a book, I just knew it was a fact. 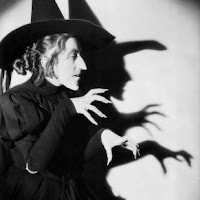 Setting up and striking, Emily treated us to the weirdest mix CD I have ever heard. She's big into Wicked, apparently. And Newsies.

An observation: How much did Margaret Hamilton owe her performance as the Wicked Witch to Max Shreck? Hamilton is diminutive, to be sure, I am not sure she was even taller than Judy Garland. And while everything around her is brightly colored (including her own green face) she is dressed all in black, a black which light seems to fall into. So she creates these silhouettes with her joints; her elbows, her shoulders, making shadows against the background, with those long fingers, jutting UP into Dorothy's face.