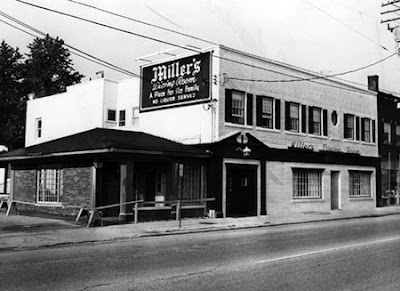 The Miller family was on old Cleveland food family. The had a butter and egg stand at Central Market. Doris Miller had a degree in home economics from Mather College and had trained as a dietician at Stouffer's. After Central Market caught fire and burned down, she talked her parents into joining her in taking over the former "Kaase's" restaurant in Lakewood at 16707 Detroit Ave.

Miller's Dining Room opened in 1950. My memories are faint, and because we always went after church I think of it as some fancy place, but it was a family-style restaurant where the emphasis was home-cooked meals at a decent price. The table cloths were crisp and white, and they even had finger bowls!

Ask anyone about Miller's and they will tell you about the sticky buns. Servers circulated throughout the meal offering a selection of piping hot rolls to whoever wanted one. It was like dim sum for crackers. The sweet and chewy, caramel-swirled sticky buns were the most popular selection.

The "average costumer ate two." The child must have had three or four, or until someone told him to stop. This was important, because I also usually ordered the chicken a la king, chicken in gravy served in a crispy shredded potato basket.

After 40 years of business, Doris Miller Urbansky and her husband Tom sold the venture to the Thomas family, who kept the Miller name and style. Five years later, in 1995, Miller's Dining Room caught fire and burned down.

For the Topping :
(to be put in each muffin cup)
1 to 2 teaspoons melted butter
1 tablespoon light brown sugar
1 dash cinnamon
For the Filling:
1/4 cup butter, melted
2 to 3 cups light brown sugar

Turn out onto well-floured board or pastry cloth and knead until smooth and elastic, about 3-5 minutes.

Place in well-greased bowl, turning to grease top. Cover with clean cloth toweling or waxed paper. Let rise in warm oven (turn oven to lowest setting for one minute, then turn off) for 15-20 minutes, or place in warm area of kitchen and let rise until doubled in size.

Prepare muffin tins by generously greasing each cup with butter, adding about 1 tablespoon of brown sugar to each cup. Set aside.

Amply flour clean toweling or pastry cloth. Roll dough out into rectangular shape no more than 12 inches wide and about 1-inch thick. Generously brush dough with melted butter. Sprinkle up to 1/2-inch brown sugar over top of butter.

Roll dough loosely as for jellyroll, pinching along the seam to secure filling. Cut into 1-inch slices and place in prepared cups.

Bake rolls in oven preheated to 400 degrees for about 10-15 minutes, or until golden brown. Let cool a minute, then remove rolls with fork. Spoon any remaining topping over the rolls.