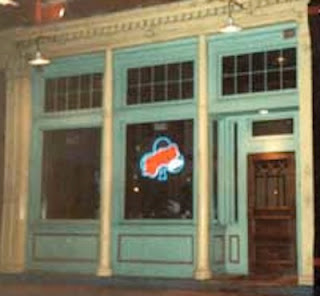 I wasn’t part of that crowd. I did not know the DJs by name. I never saw Trent. I was never a very attractive Goth, I couldn’t thrift to save my life, there was nothing to be done about my hair, when I dressed dark I looked clownish. But I went to The Nine.

Before it was became an adult video and novelty store in the 1990s, 1273 West 9th Street was home to the legendary Nine of Clubs nightclub, one of the very few public locations for listening and dancing to “Progressive” dance music. Most of the music I remember and love from my college years I first heard there, and sometimes nowhere else since. 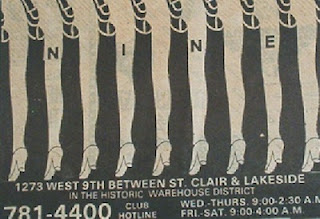 Once during Spring Break in 1988 I was sitting at a table with my sketchbook, getting examples of hair and make-up. I was trying to drink and mind my business but I kept getting hit on by middle aged dudes.

On December 25, 1987 we had gathered to celebrate Hog’s 20th birthday. Checking out after hours a small group of us, boys and girls, were head to the parking lot across West Ninth (there are condos there now) when this dude in a trenchcoat who had walked out at the same time as we had started messing with the birthday boy. Hog was hammered and he thought the guy was being friendly. The stranger said he had been in the Marines and my friend said he had a cousin in the Air Force, you know, to go along, but that really pissed the guy off. He pulled up his shirt to show off a scar in his abdomen he claimed to have gotten in Beirut. 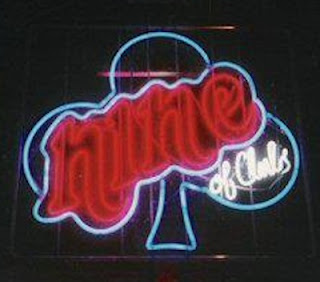 That was when he pulled out the gun.

Hog freaked out and started whimpering while we tried to talk the guy down. But the guy started laughing, put the gun to his own head and pulled the trigger “click” and then walked away. Before we got home, somebody (I won’t say who) vomited in the car.


There's a big Nine of Clubs Reunion going on tomorrow night on 78th Street Studios, a benefit for Be The Match Foundation but it's sold out already. (Now mope.)