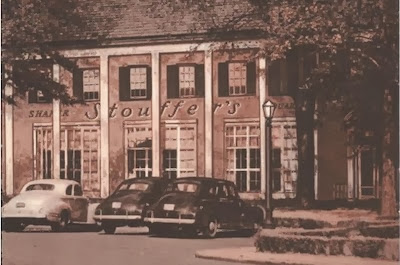 Abraham and Lena Stouffer had a farm in Richfield, 28 miles from downtown Cleveland. They started a coffee shop in the Arcade in 1922. Lena's apple pie is credited with giving the family name its great reputation.

The first Stouffer's restaurant opened in the Schofield Bldg. on the south-west corner of East 9th & Euclid. Sons Vernon and Gordon expanded the business into a flourishing chain of restaurants in Cleveland, New York, Detroit, Pittsburgh, Chicago, Philadelphia -- every important city in America.

The first "suburban" Stouffer's restaurant opened at Shaker Square in 1946.

Their nation reputation was based on the distribution of "partially cooked" meals which could be prepared at home in limited time. In 1953 they opened a plant on Woodland Avenue to develop these "frozen foods." This brand of their business was a separate corporate entity, in 1954 named the Stouffer Foods Corporation.

The "TV Dinner" was originally a brand name, which later became a genericized trademark, created by C.A. Swanson & Sons in 1953. You know what that is, a pre-packaged meal, complete with meat dish and sides in an aluminum tray that you can heat up quickly in the oven. Stouffer's, however, tried to set itself apart from Swansons by touting the "high-end" quality of its frozen food products.

For those of you unaware because you haven't read Fast Food Nation or because you simply haven't been paying attention, "flash-freezing" food products (chicken, potatoes, what have you) virtually erases all discernible flavor, and so most pre-packaged meals are jacked up with salt, fats and artificial flavoring.

FYI - The Stouffer's name would not be added to the hotel on Public Square until 1978.