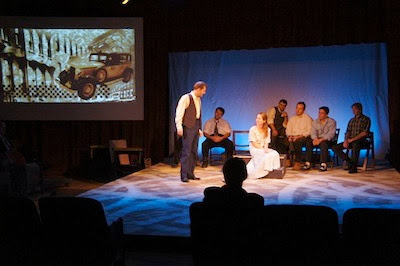 The People's Theatre is not aligned with any political party. That is the euphemistic way of saying that it is not Communistic, and its organizers wish you to be clear about that. - William F. McDermott, The Plain Dealer, 1935

The new Mandel Jewish Community Center has many exciting new features, but theater? Eh, not so much. Dobama managed miraculously to maintain an identity in the wild before returning to the Heights at their fine new home in the CH-UH Library complex. And Ensemble has carved a new home out of the former Coventry Elementary School, and a really great space it is.

Two out of three? Not bad.

This afternoon I caught the closing performance of Ensemble's production of Waiting For Lefty, the first show in this new theater space. Life has not been kind to my wife's extended family the past several weeks, and in spite of wanting to catch numerous productions this fall, several closed this weekend without an opportunity for us to see them. At least I could catch this 70-minute program in my own backyard.

Seated in the front row, I invited Mike Partington to take the chair next to mine. It had been years since we had had the chance to talk, and this week I saw him both at Harvey's Tribute and in this place. Mike's got some years on me, our pre-show conversation had a lot to do with theater space, how he first reacted to the new Bolton Theatre at the Play House -- same as almost everyone else, really, stunned that they had dumped a thrust stage at East 77th Street to add yet another proscenium.

Ensemble Theatre has a thrust, with seating sections on three sides. It feels more like the old Dobama on Coventry than the new Dobama does. The platform stage is so close to the audience, and actors make entrances and exits through the house as well as through the wings. I love that.

I was very pleased to see such a large audience on a Sunday afternoon. Sunday matinees are notoriously depressing in Cleveland, with maybe ten to twenty people in the house. It was quite a full house!

So. First time seeing Waiting For Lefty in its entirety. How does it hold up? Interesting! While employing period costumes and some kind of non-specific tough-guy New Yawk accents, the Ensemble production utilized their large video screen to bridge scene changes with footage and music from the future (HUAC testimony, Occupy Wall Street demonstrations) to empasize the continuing resonance of the work.

Remember: The Living Newspaper performances of the 1930s did use film projections and live music to bridge scene changes, and as commentary!

However, having just directed a staged reading of It Can’t Happen Here, I have been disabused of the notion that writing from the 1930s is dated, or must feel dated. Sinclair Lewis words, spoken by a contemporary cast, was suprisingly fresh, meaningful, humorous and resonance with our modern audience last Monday night. People were taken with the story, and moved by its conclusion.

A friend who caught the show reflected how much more slangy Lefty is, which explains why it is seems dated. Also, there’s no real story to be swept up in, it is a collection of vignettes on a common theme. It’s like Saturday Night Live without punchlines.

But that’s not the real problem with its presentation as a contemporary work. It’s one long debate, more like Greek drama than soap opera. For example, the tale of a young suitor, on a perfect summer’s evening, breaking up with his devoted gal because he can never be the man that she deserves in this economy, where the bosses and the company men keep the worker under his boot, where a guy can’t earn a crust while Uncle Sam stands idly by, doing as little as possible because the truth is The Man still mans the controls of government and always will, so the little guy is left to gasp meekly for dignity - let alone a dollar, and its high time we pulled together and rose up to demand what is coming to us, an eight hour day, a pension and a heart handshake, but until that day comes I will never be the kind of joe who can care for a girl the way she deserves to be treated, and not like some two-bit floozy, always promising, never committing, I mean what kind of life is that for a young American lady? The Masters of Power don’t care about these things, the velvet-gloved capitalist executive sees the workers as an endless supply of hands and muscle to hoist the gears that make the things that fill their endless, bulging pockets …

Hey, baby, where you going?

After the performance, the audience was invited into another part of Coventry Elementary (wait, do we have a name for this new community facility concept?) for a special event celebrating the opening of Lake Erie Ink.

And wow-man-wow, there were a lot of people there! Cleveland Heights Poet Laureate Cavana Faithwalker represented, and world-renown hipster-shaman-beatnik-poet Ray McNiece was on hand to lead children in poetry exercises. There were a number of writing activities for young and old, I wrote a haiku on a paper pumpkin:


WORKERS THEATER
JUST SAW ‘WAITING FOR LEFTY’
LIKE AN UPPERCUT