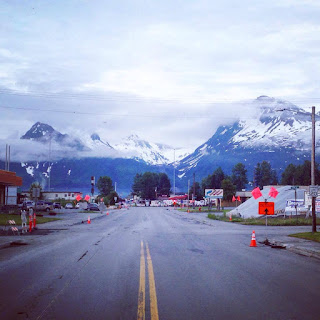 My goal today was to meet far more people than I had met yesterday, and that was very successful. Most of the day was spent right there at the conference center.

I arrived much earlier than necessary. I rose early, but not too early, which afforded time to relax, get a special coffee, take a run, and reflect upon the horrors made evident when I checked the news feed. I do not know what to say about that at the moment. I am not sure I have anything meaningful to add which has not already been said by others.

Ironically or tragically, during our conversation last night Joe and I were speculating upon the impact of a terrorist attack on the presidential race. As remote as we currently are, the distances between us are no longer so vast.

I tried to do a little free writing and chose a perch upon a pier but the gnats were a problem. The bug spray I chose does not impress them much, so I retreated to the conference center to charge my phone and spy on all the featured artists arriving for their orientation.

Each featured artist will be attended a few of the Play Labs, three will attend mine, I will make an appointment with one of them to spend additional time to discuss the script after the reading. I met several today, mingling and also as they led seminars across the afternoon I even had a delightful conversation with one of my own panelists, though I did not appreciate that she was one at that time. I am assuming she did. I know I did not saying anything stupid.

Wait, scratch that. I told her about my colonoscopy.

Mealtimes were the best for meeting new people, lunch was brought in and enjoyed in one of the meetings rooms, dinner a delicious fish fry and we took our plates and at on the grass overlooking Port Valdez, the mountains.

We spent four and a half hours in three seminars, but the time did not seem nearly that long. The first was on tools for revision, the second on poor plotting (or “Why does my play suck?”) and the third on writing work that appeals to an international market.

When detailing the various obvious and often employed pitfalls in writing a play, I was put in mind of the old advice that one must never read a text on mental illness, due to the inevitable compulsion to self-diagnose, and invariably discover you have a host of terrible, encroaching disorders.

Characters shouldn’t about people who aren’t there? That’s all the characters in my play ever do!

I exaggerate. But that’s only one example.

By the end of the afternoon, I had stimulated by each experience and each provided valuable and practical insight. And honestly, while I actually came away more confident in my work than I was this morning, I am also developed a heightened awareness for what may or may not be clear during the reading itself.

The evening was rounded out with presentations by each of the featured artists, reading their work or the personal favorite of another, and four short plays at the Fringe at Best Western which was hilarious. The writing satisfies, but even better the high energy the actors put into these pieces in ridiculous great fun.

And I finally met Valerie Hager!
Posted by pengo at 4:19 AM