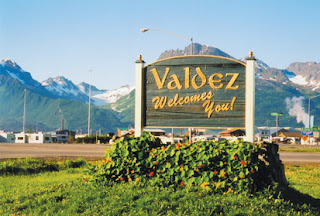 Challenging to conceive that in just a few days I will be in Valdez. I am an easy traveler, I know how to pack simply, wisely. A week long journey with plans to visit the laundry exactly once. First, a day long flight to Anchorage.

Yes, I will have my phone, an iPod, the laptop, and also my notepad and pen, and a novel. That’s something I need to find, I am currently without one. Generally I prefer non-fiction, but not on journeys. What to read? Suggestions welcome.

The program for this year’s Last Frontier Theatre Conference is available online. I have perused the workshops and seminars that are being offered, and the evening performances. Valerie Hager will be presenting her solo work, Naked In Alaska, which was a must-see production at the New York Fringe in 2013, which was also the year we produced Double Heart at the Connelly.

However, I could not get a seat, because performances kept selling out … but now I can! I am reminded of when Weeping Spoon brought Alvin Sputnik to the International Children’s Theatre Festival. That was another sold-out hit at the NY Fringe (2009) that I was provided another opportunity to catch.

This morning the wife and I were looking over the agenda, on any given day there are two or three Play Labs to attend, and seminars are divided between performance- and writing-based concentrations. It’s interesting; several deal with genre I have attempted before (Personal History Writing or From Newspaper to Stage) but never received any instruction in. I am very interested in receiving such instruction.

The program was also how I learned who will be my acting company for the new work I wrote. Taking place over two time periods, ten years apart, I was hoping for actors who could realistically play both 18 and 28 years of age. With no idea what kind of acting pool might be available in the “last frontier” imagine my delight and surprise when I found the producers had contracted two experienced performers in their mid-20s.

I have had a few reading with colleagues. This will be a first with artists whose work I don't know -- and who don't know me from anybody.

This new work, which I have formerly referred to as The George Michael Play, is a romantic, ninety-minute two-hander, or I hope it will eventually be ninety minutes, at the moment I have no idea. It is ninety pages, which may or may not amount to a minute per page. Regardless, after many adaptations, histories, sequels and parodies, this is the first truly original work I have composed in some time. It's new to me, it's different. And it's very exciting.

In addition, playwrights in the Play Lab were invited to submit 10 minute plays and also monologues for a series of workshops which will culminate in performances at the end of the conference. I took advantage of each of those and was very pleased to not only have an original monologue accepted, but that an actor has already chosen it as their subject for their workshops. If they stick with it, I may even see that performed just a few hours before I board my flight for home.

You may read this monologue here.
Posted by pengo at 11:05 PM