In 1972, Akron native Tom Batiuk (b. 1947) created Funky Winkerbean which was the "high school" comic strip alternative to Doonesbury's "college" comic strip. Before either strip developed characters with any deep sense of personality or history, they were really all about the 1970s experience of attending a school. 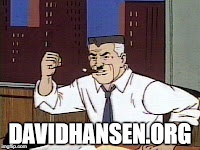 Reading Funky every day as a kid (and having a few paperbacks in the house) I was impressed most by Les Moore's getting stuck at the top of the climbing rope overnight, Crazy Harry's living in his locker, the hall monitor with a machine gun (imagine that being funny in today's comics) and best of all, the haplessly unhip teacher who tried to stage a "rap session" with "the kids." She asks what anyone wants to talk about and when one student calls out "SEX!" the teacher develops an unstoppable case of the hiccups.

In general, however, it was a gag a day strip, often groaners, but the deadpan faces of the characters (pre-smirk era) taught me how to, you know. Deadpan.

STUDENT: Can I get a pass to the restroom?
TEACHER: Yes you may.
STUDENT: (deadpan) Good. I need a rest.

Wish I could find that one. It was funny.

Recently found this adaptation of a Winnie The Pooh comic, which best illustrates what went wrong with Funky Winkerbean after its angst-ridden 1992 relaunch: 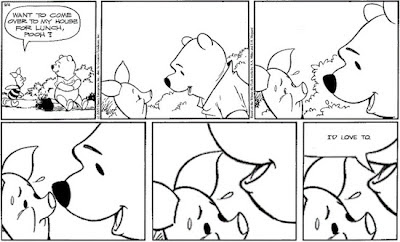 Whew. Didn't know what was going to happen there. Can't wait until tomorrow.

Sources:
Comic Strip Fan.com
Son of Stuck Funky
Posted by pengo at 6:24 AM