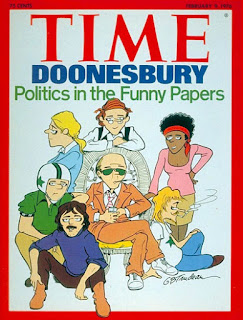 I drew cartoons before I knew Doonesbury. But only after knowing Doonesbury, did I start drawing comics.

M*A*S*H indoctrinated this boy into a philosophy of relativism and secular humanism. Doonesbury taught me character, plot, humor, subtlety, sarcasm, and yes, it was where I got my news. Creator Garry B. Trudeau (b. 1948) may have ruined comic strips forever because of his flat, static drawing style, showing two people talking to each other but never moving (Calvin & Hobbies had great fun with this once) or worse yet, feeling so insecure about his ability to draw actual people realistically that he chose to depict the same drawing of the White House over and over rather than have to draw Nixon.

But he also broke ground in what was generally thought of as the controversy-free zone of the comics page; treating drugs as a subject for humor, introducing the first openly gay character in comics, and in 1975, was the first comic strip to receive a Pulitzer Prize.

In Fall, 1976 Joanie Caucus is the campaign manager for her friend Ginny's run for Congress. They are defeated by the Republican candidate, Lacey Davenport, but the upshot is Joan's acquaintance with Washington Post reporter Rick Redfern, who is in California covering the race. After the election, they both let their guards down enough to begin flirting in earnest, and Trudeau created a legendary series of strips which involved Ginny trying to reach Joanie at her apartment.

On Monday we see the phone next to Joanie's unmussed bed ringing, and pan out of the bedroom window, as in a film. The next day we fly from her house, across town, finally zooming into the bedroom window of Rick's apartment:

This technique of creating suspense, and taking time to play out a dramatic plot point was unique in the world of daily comic strips. It is not unique anymore, because Tom Batiuk, creator of Funky Winkerbean uses this form over and over again to ploddingly spell out horrible accidents and life-altering mistakes which have no suspense because you knew they were going to happen months earlier when the doomed character in question said, "Another drink wouldn't hurt," or "what's this lump?"

Batiuk actually used the same technique here -- exactly the same, in fact -- 35 years later, when Les has sex for the first time since his wife died. Same slow pan, on a house, to reveal an intimate post-coital moment ... only in this case it looks miserable and unhappy.

I did use this same technique myself in my daily strip in college, taking a week to illustrate my protagonist's struggle with insomnia.