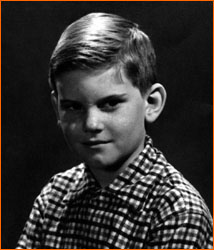 Samuel Reese "Chip" Sheppard (b. May 18, 1947) was sleeping in the next room when his mother was savagely bludgeoned to death. It happened some time before 5:50 in the morning, when his father called the neighbors over to the house. It was Independence Day.

Sometime before 7 AM young Chip was taken from the house by his Uncle Richard while police officers, neighbors and journalists invade his home, touching and looking into everything they own. All this seven year-old boy was told was that his mother had "gone to be with the angels."

His father had been injured, his mother was dead. Due to extensive publicity, the boy would not be allowed to attend his mother's funeral three days later.