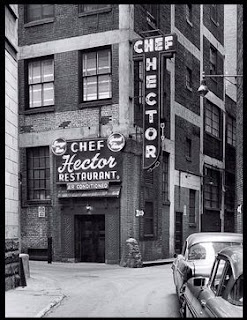 Really? That's what it says. Amazing, there's your American success story for you, right there. His abilities attracted the attentions of the owners of the Windham Hotel, who lured him to Cleveland. He must have been some kind of business entrepreneur because in 1924, before he was even close to 30, Boiardi has opened his own restaurant, Il Giardino d'Italia (The Garden of Italy) at the corner of East 9th and Woodland. He lived at that time at 2501 Arlington Road in Cleveland Heights. 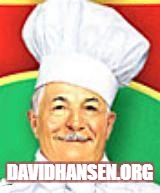 Now, the foods we traditionally think of as "Italian" in this country are based on the simple, inexpensive meals prepared by the poor immigrants who were looking for a new way of life. Italian cuisine was and is diverse and interesting - in Italy. But in the United States in those days it meant pasta and sauce. Experiencing the relative cheapness of the basic ingredients only made the portions larger, not more adventurous.

As the Depression stretched on, spaghetti and the entire Italian food craze was in full swing, and Il Giardino was a hit. Citizens clamored to take home Boiardi's sauce, which he was happy to sell to them, originally in milk bottles with a bag of dry noodles and Parmesan cheese to go with. He soon built a factory to keep up with demand.

World War II was where the Chef really hit the big-time, creating easy-to-prepare canned spaghetti for the Allies. By this time, his well-known canned pasta products were selling under the name "Boy-Ar-Dee" in a successful attempt to get everyone to pronounce his name correctly.

Like so much else that gave "our boys" comfort during the war, demand continued when they returned to the States.

DID YOU KNOW ..? Self-adhesive stamps were designed to provide to soldiers during the 1991 Persian Gulf War because gummed stamps were useless to carry around in the deserts of the Middle East -- and that their domestic introduction was due to, you guessed it, demand from Iraq War vets? True story.

Though operations moved to Pennsylvania during the 1930s, he remained a dedicated Cleveland restaurateur, opening Chef Boiardi's in 1931, and becoming a part-owner in several other local establishments.

Chef Boyardee died in Parma. And haven't we all, at least once?

Brian Pedaci There is currently a NYC-based theater artist named Cheryl Bear who is tearing through all of my short plays on New Play Excha...