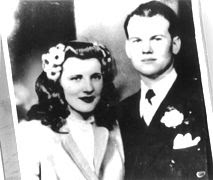 Let's dig right in, shall we?

The end, moving on.

Dr. Samuel Holmes Sheppard (December 29, 1923 – April 6, 1970) was an osteopath, living in Bay Village, Ohio. He was married to Marilyn Reese Sheppard, mother to their son, Sam, whom they called Chip.

In the early morning on July 4, 1954 Marilyn was brutally murdered in their lakefront home. Sheppard gave conflicting reports about the events in question, claiming he had seen a "bushy-haired intruder" assaulting her, with whom he got into a fight and was knocked out. Pursuing the assailant to the beach, he was struck unconscious again.

The trail of Sam Sheppard for the murder of his wife ... Jesus, I can't even write this, everybody knows this story. The Fugutive, The Cleveland Press, Louis Seltzer, F. Lee Bailey, it makes my head hurt.

How's this ... the made-for-TV movie Guilty or Innocent: The Sam Sheppard Murder Case was released on November 17, 1975 starring George Peppard as Dr. Sam. Someone in my family watched it. It couldn't have been my father - he had absolutely no interest in this case, the man was guilty, full stop. It was probably Denny, who was in eighth grade. In any event, I took in this horrid story, told in the form of a horrid TV movie, at the tender age of seven. My daughter is seven.

So, since the second grade I have been aware of this gruesome tale, of what the word "bludgeon" means, to know that justice does not exist, that truth can be unknown, what the 46 year-old George Peppard looked like without a shirt ... a child does not need to know these things.

And to think that it happened in my home town.
Posted by pengo at 3:38 PM