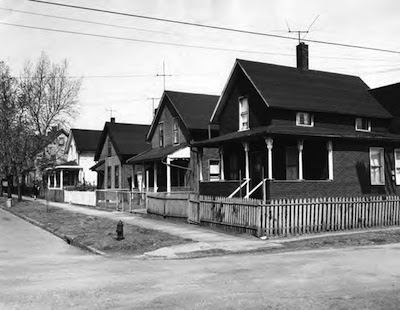 It was the site of the short-lived Cleveland University in the 1850s, a fact which gave name to the still-extant Literary Rd. and Professor and College Avenues. The neighborhood was called Cleveland Heights, then University Heights, and finally Tremont after the Tremont School, founded in 1910.

Homebase to a fastener manufacturer, the neighborhood was home to working-class immigrants following a familiar cycle -- the Irish and Germans in the late 1800s, followed by Poles, then Greeks by the end of the century, and also Syrians and by the 1950s a large population of Ukrainians. By 1954, Puerto Ricans were joining the population, and they play an important part of Tremont's neighborhood today.

Lincoln Park is a center of public activity, bounded by West 14th and West 11th Streets and Kenilworth and Starkweather Streets. A memory of Lincoln Park ...


"Sundays people would gather on the grass and benches to chat with friends or play cards, checkers, dominos and chess on the picnic tables. Some would bring picnic baskets from home while others stopped after church. Children played soccer or played at the pond that was in the center of the park, they also had a carousel and swings, too.

"Water fountains were at the corners of the park off Kenilworth/West 11th and West 14th and Starkweather. There were bushes completely around the whole park and Post Lamps that lit up the park at night. They had toilets, but Mom remembers them being dirty. Mom seemed to think there were no sidewalks on the inside of the park in the early days, but brother Mike says there were always there.

"I remember goldfish in the pond and Mike says they broke ground in 1957 to put the swimming pool in that still stands today. Swimming was free from 7 years old and up, but you had to sign in your name and age before getting in. They would check our toes and make us take a quick outside shower spray before getting through the bar gates. Wednesday was Family night for swimming where parents could come. Teenagers would climb the fence and skinny dip late nights, too." - Maria Cairns-Yuras