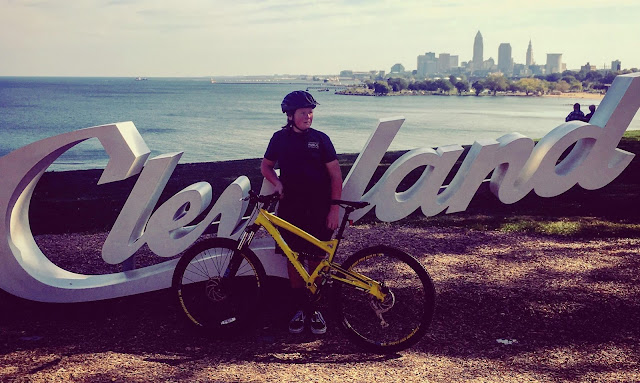 At the devastating conclusion of 2016, I pointed up ten moments from the year which made it worth living, because there needs to be something. The past few months have been spent coping with great anxiety over my mother’s health, and there is yet much to remember and to celebrate about 2019. 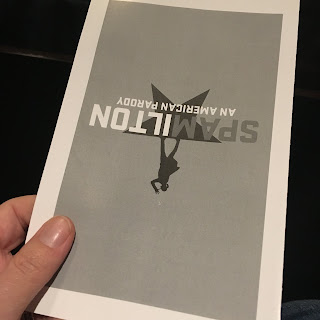 The girl and I went to the Hanna the day after New Year’s to enjoy Gerard Alessandrini’s parody of Hamilton, which was delightful in its low-budget aesthetic, fast pace and cheap jokes. If you aim at a king you must kill him, and it was the versatile comic abilities of the performers which kept us in stitches.

Though my daughter got all the Hamilton references, I did have to help her out a little with the more obscure musical theater references. And by obscure I mean Liza. The kids don’t know Liza.

2. "Witness for the Prosecution"

There are a few non-speaking roles in Agatha Christie’s courtroom drama Witness for the Prosecution and I was asked by Great Lakes Theater to appear as a barrister for a small number of student matinee performances, the very first of which was for an audience of mostly middle school students.

They sat surprisingly silent throughout this sixty-six year-old drama, and we were all shocked and delighted when the place erupted during the final five minutes as Christie revealed first the first verdict, then one twist upon another. It was a unique experience you can only get from live theater.

This spring I had the privilege of mentoring a New East Tech High School student in creating a public health play script. Actually, it was originally slated to be a live performance, then the screenplay for a short film. The student is a poet, with a great sense of style and humor, and mostly I shared with her what I saw, what I felt was missing, which moments were better reported and which dramatized.

Checking in every other week, she wrote very fast (and on her phone, no less) arranged table readings with her classmate and oversaw the production of the final video product. 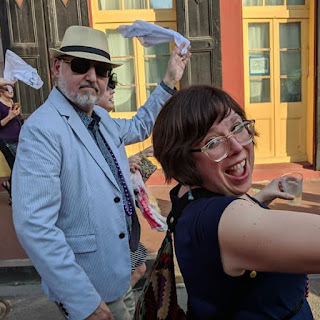 My wife and I attended a stunning destination wedding in New Orleans, which was delightful and romantic in so many ways. We once visited the Crescent City together, over twenty years ago, and there is no one I would rather travel with, she is my soulmate in tourism. Also, it was a delight to participate in a richly fantastic Millennial nuptial composed of so many of my theater and actor-teacher colleagues.

For feminists (and those who love them) it has been the best of times, the worst of times. But the best moments can be spectacular, like Megan Rapinoe and the utter dominance of Team USA in the Women’s World Cup. You could catch us most matches at a huge, full table at Heights Grill, people by members of the high school team, their coaches and families.

And you would know us by my wife’s mauve do.

Twice this summer I joined the girl in investigating colleges and universities, first in NYC and then in Providence. It was a joy, stealing this opportunity to spend one-on-one time with my daughter in new places, trying new restaurants, watching her take extensive notes on what she’s discovered.

My son was introduced to Green Day early and they are the bedrock of his rock and roll education. I took him to see the Broadway tour of American Idiot at the Palace Theatre when he was nine, and the Beck Center production a year later (Beck’s was better) and when he was cast in the American Idiot show at his chapter of School of Rock I may have been more excited than he was.

I have run from my house to my parents house a few times, at least once each time I have trained for a marathon. This year I did it twice, the second time with my son. He was riding, I was running. It was a hot day, the last ten miles were grueling (much like the race itself) but having the opportunity to share the experience, the city, my training, four hours together making our way from Cleveland Heights to Lakewood, we had an adventure.

I’m not actually the kind of father who pushes his artistic interests onto his children. No, really. But we have also exposed them to an awful lot of what we like, which is nearly everything. So I believe they have come to their tastes organically.

Having said that, the boy has also been a huge Soul Coughing fan and when Mike Doughty announced he was touring the twenty-fifth anniversary of their first album Ruby Vroom I thought that was a father-son experience not to be missed.

Falling as it did this fall in the midst of great emotional turmoil, listening to Doughty and his band conduct a faithful recreation of the album live was surprisingly affecting to me, a stark reminder of my young adulthood. I may have cried (I didn’t actually cry.)

It’s been hard. It continues to be hard. But I am so grateful to my brother Henrik for returning from England -- for the second time in two months -- so that one of mother’s boys were home for the holiday, affording me this opportunity to be with Toni’s family in Athens, if only for a couple days.

Merry Christmas to you and yours, best wishes for the New Roaring Twenties.
Posted by pengo at 1:55 PM