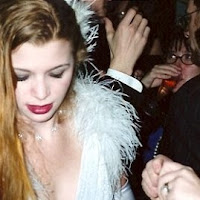 “It's something you learn after your second theme party: It's All Been Done Before.” - Prior Walter, Angels In America

We used to have parties, lots of parties. Post-show parties, theme parties. My first 1980s Revival Party was in 1989. Once upon a time that would have seemed cutting-edge, but seriously. We’re talking about parties.

I had a premonition of dread regarding NYE 2000, which had as much to do with my personal brain chemistry as it did with politics, culture, and the residual fear that Christ was returning and that we were all totally fucked.

We saw the Canadian art-house film Last Night at the Cedar-Lee in December 1999, an apocalyptic comedy with a mean streak of melancholy (speaking of which, Lars Von Trier entirely cribbed the premise for this movie for his Melancholia only eliminating any trace of humor) which left me feeling refreshed, and positive. The world might end, but it’s going to do that, anyway. At least we have had love.

I looked forward into the 21st Century with a renewed sense of hope. And we all know how well that’s worked out.

To celebrate the end of the Millennium, on December 31, 1999 (numerologists be damned) we invited our friends to decorate our house for a Twentieth Century Revival Party, assigning a different decade to each room.

A salute to Spiritualism was featured in my office, a Roaring 20s speakeasy in the bathroom. There was a Depression-era soup kitchen in the dining room, in the living room a WWII USO party. Cold War martinis and Hawaiian appetizers in the kitchen, the basement was a psychedelic Sixties happening with brownies, both leaded and unleaded.

In the hallway upstairs I erected a stack of television screens which played a six-hour curated VHS video of 80s MTV clips. Remember when MTV played music videos? Of course you don’t, no one does.

And the wife’s office included computers featuring newfangled "webcams" of New Year’s Eves in New Orleans, New York and elsewhere, and guests recorded messages for a time capsule we will open on our twenty-fifth wedding anniversary.

We gathered in the USO Hall for the countdown to the new century (numerologists, shut up) and the best prank which did not happen was when Brian thought of going into the basement and killing the power exactly at midnight, only he didn’t and just told me about it later.

Practically everyone I knew at the time was there. Certainly, almost everyone engaged in our work with Bad Epitaph and Dobama's Night Kitchen. New Year's Eve is fun, but I don't think anyone wanted to be caught without something special to do that night and I am glad so many chose to come to our party, to be with us.

But that was it. Whether an effect of growing up, losing a child, or having living children, we stopped throwing parties at our house. We looked inward. Certainly, my wife and I continued to be social animals, but turning our home into the site of such loud, animated festivities became a thing of the past.

But who knows. We have teenagers now, and they may come up with their own ideas. After all, we are on the threshold of the "New Roaring Twenties."