"Sherlock Holmes and the Bullies of Baker Street"

The assignment was basic, yet complex. To write a play for children, one that would engage their imaginations and also entertain, to teach empathy and important lessons in positive social behavior (to wit; an anti-bullying message), one based in literature in keeping with the education department’s mission of fostering a life-long interest in the classics.

And why not a mystery? The professional wing of our company has in recent years produced one mystery a year. We would employ a familiar character -- one in the public domain -- perhaps the most famous detective of all.

This concept was still in the “what-if” phase when my supervisor, Lisa, blurted out a fanciful title; Sherlock Holmes and the Bullies of Baker Street!

It was supposed to be a joke. There is an entire cottage industry in “bully” plays, with titles like “Bullybeard the Pirate” and “How I Stopped the Bully” or even “The Bullying Bullies of Bullyville.” I made those up, just now, off the top of my head, but search them. They may exist.

The motivation behind these works is not unwarranted. Our educators are always seeking new ways to teach empathy and stem youth violence and intimidation. But could we create a play for children which satisfies a socially conscious mission and also provide an entry point to works of classic literature? 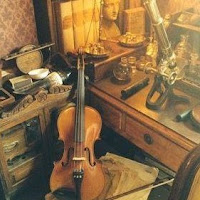 Lisa’s title sounded iconic, and yet entirely original. Whereas I was unsure of my ability to pull so many threads into one fifty minute show -- intended for children aged five to ten -- suddenly I was imbued with interest and enthusiasm. The game, you might say, was afoot!

(“The game’s afoot,” by the way, a line now commonly associated with Doyle’s legendary consulting detective, originates as all great English writing does, from Shakespeare. It’s from Henry V, a fact I was reminded of this summer when I saw an outdoor production in Public Square.)

Shortly before the deadline to announce the tour, I decided to tweak the title a bit, to Sherlock Holmes Meets the Bully of Baker Street.

With this new title, the star is up front, the verb meets (rather than the passive conjunction and) evokes thrilling early 20th century action films, and the single bully is a mystery all its own -- Who is the Bully of Baker Street?