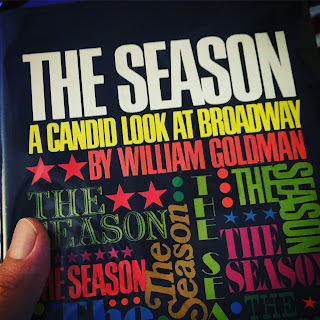 Twenty years ago my friend Roger, a Chicago theater director, recommended to me William Goldman’s book The Season. He told me he reads it every year.

Shortly thereafter, the wife found a fine first edition at a local bookstore, and I promptly read it. I understood what Roger was getting at, what an instructive and engaging read it is, and fully intended to follow his lead and re-read it the following year.

Last month the author, William Goldman, best-known as the screenwriter for films such as Butch Cassidy and the Sundance Kid, All the President’s Men, and The Princess Bride, passed away at the age of 87. His book, The Season, stared at me, untouched, from the bookshelf in my office.

So I finally re-read The Season, a thorough and utterly demoralizing report on the state of the American professional theater, specifically Broadway, exactly fifty years ago.

Goldman received a grant which he employed to cover the entire 1967-68 Broadway season, attending every show, and interviewing a wide variety of players; actors, designers, technicians, stage hands, directors, producers, ticket agents, ticket “brokers”, audience members, and critics, and everyone in between.

One of the bitter joys of reading this book is how Goldman aggressively takes the piss out of everyone, from Clive Barnes to Neil Simon to Mike Nichols. It’s also tiresome, because we love Clive Barnes and Neil Simon and Mike Nichols, and while the author makes us complicit in his insult humor by making us his audience, his sense of superiority over absolutely everyone in “the business” means it’s hard to take any of it seriously, and he is deadly serious.

He’s also really funny. So you stick with it. Even through all the data, and there is an eye-crossing amount of data. After a joyride through perplexing London transfers, horribly ill-thought musical concepts, and cringe-worthily dated American plays on the Generation Gap (plays as memorable as films like Skiddoo and I Love You, Alice B, Toklas) Goldman draws his final conclusion on the fate of Broadway and American theater in general in an overlong final chapter, “What Kind of Day Has It Been?” (Aaron Sorkin fans, take note) stuffed with the results of a survey he himself commissioned; percentages and lists and numbers, numbers, numbers, asking “What do audience members want?”

Freud once asked a similar question about women, with a comparable conclusion. ¯\_(ツ)_/¯

His prognosis for Broadway was dire, and while this may have been a cautionary tale when I first read the book two decades ago, during the time since there has been something of a correction. And the truth is much of what he said needed to change has born itself out, namely through diversification.

During the 1960s the makers of film, and those who produce and distribute them, discovered that you didn’t have to make all films appropriate for everyone, and Goldman concludes, naturally, that the same should apply to the creators of theater. Remember, we’re talking big-budget, professional theater. Plays, and specially musicals, even on Broadway, can be directed to segmented audiences and you can still make a pile.

He also predicted the increasing irrelevance of Broadway itself, and how the best playwrights were Off-Broadway or even (egad) off-off-Broadway. Recently I heard the critics from Three On The Aisle note how some of the best voices aren’t even in New York, which is crazy, I know.

Speaking of which, race and gender are entirely not addressed in this book, and it is good to remember the progress which has been made, even in just the past few years. Every play referenced in The Season, and there are so many of them (e.g., Staircase, Dr. Cook's Garden, The Freaking Out of Stephanie Blake) was written, directed and produced, and (with a handful of exceptions) performed by Caucasians, and women are merely in the performance category. But as much as Goldman likes to be cheeky about closeted homosexuals (it isn’t pretty) and Jews (for which he claims a pass) he has nothing to say about this disparity. It didn’t occur to him to mention it.

When I first read The Season, it was at a time I thought of myself as a director. Now, it is a playwright. And as such, here are my three major takeaways in 2018, or Things I Learned from William Goldman about Playwriting:
Wisdom for the ages! I look forward to reading The Season again in 2038.
Posted by pengo at 10:00 AM

Email ThisBlogThis!Share to TwitterShare to FacebookShare to Pinterest
Labels: Rosencrantz and Guildenstern Are Dead (play), The Season (book), Who's Afraid of Virginia Woolf (play), William Goldman