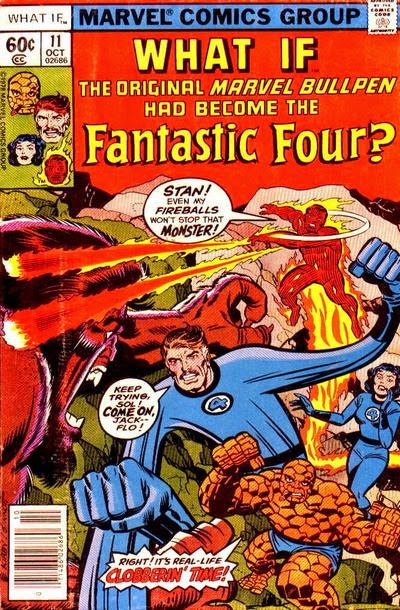 WHAT IF ... The Original Marvel Bullpen Had Been A Socialist Collective ..?

The origins of the most indelible characters in DC Comics were created by artists and writers whose ideas were kept by the corporation, the enrich those who owned the company. These artists were paid for the work - the artwork, the pages - they produced. But the ideas remained the possession of the corporation, in perpetuity.

As long as you were an employee, you were paid a wage. Once you left, your characters - which in other industries we may compare to inventions, patented or copyrighted - remained behind. No residuals, no royalties, even the artwork itself was owned by the corporation for which it had been created. (See: Superman.)

So it was also with Marvel Comics. Jack Kirby, Steve Ditko, Steve Gerber - they did not own The Fantastic Four, Spider-Man, Howard the Duck.

Only Stan Lee benefited from his initial contributions to the early works of Marvel, because he never left. As the years went by, his self-made legend grew and he was able to capitalize on this and make a fortune. I will not debate whether he was anything more than an editor (to his dying day Kirby insisted Lee never wrote a word) but he certainly made himself the Ronald McDonald of Marvel Comics.

By the 1980s, management at DC and Marvel had learned that by providing incentives (let us not call them royalties) for popular work, they could encourage artists to create comics that would have the broadest appeal. In the case of Marvel, this also translated into cross-title storylines which increased their bottom line exponentially.

For a brief period of time, the lasting effects of the so-called Silver Age of 1970s comics (for which people of my generation were so emotionally connected to) coincided with the glut of multiples titles for one character or team and "event" comics, so that everyone on board at that time lived in security and in a couple of cases, great wealth.

That lasted one or two years. And by that time (some would argue long before) the comics were awful to read and look at, and the emperor was revealed to have no clothes.


Imagine an alternate Marvel Universe, where the original Marvel Bullpen (if there ever was such a thing) was a profit-sharing collective, where success for one was success for all. Where funding went to training the best artists and writers and editors. Where there was a strong, paid internship program, vacations and great health care for emphysemic illustrators?

Well. We know Steve Ditko would have no part of it. And no doubt a model like that would never produce an artist-entrepreneur like Todd McFarlane, or any of the Marvel-inspired blockbusters of the last ten years. They'd just continue producing low-grade pulp superhero comics strictly for the people who like to read them.

But unlike the What If titles of the late 1970s and early 80s - which always ended in disaster, as if to prove the correctness of the canonical storyline - perhaps this alternate universe would have had a happier ending, at least for the artists instead of the publishers.

Source: Marvel Comics: The Untold Story by Sean Howe
Posted by pengo at 6:50 AM