The evening we concluded the Love In Pieces project, I was floating, delighted with work well-done, executed with joy, talent and energy by an ensemble of colleagues and friends, both old and new. Most of all I was relieved and overcome by the satisfaction and praise of she whose opinion I was most concerned about - the playwright.

Desiring to share my happiness, I posted the following status update before attempting to actually go to bed:

However, not five minutes later, this response was posted: 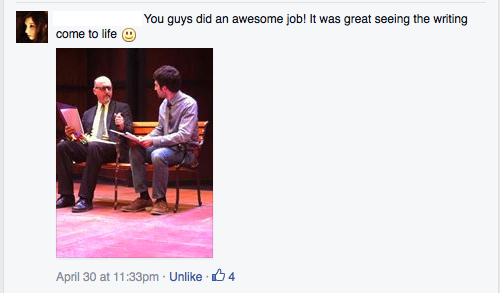 What? Oh, yes! Not the playwright I was thinking of at that moment, but of course! People come and go so quickly here ... it wasn't barely more than twenty-four hours earlier I and a number of the same artists employed in Love In Pieces were participating in the annual Lorain County Community College Playwriting Contest, produced in collaboration with Great Lakes Theater.

Last year was my first curating this event, which another part of GLT's annual free, Surround programming. The outreach tour (e.g.: Seven Ages, Double Heart) is another. Truth be told, most of the hard work is done by our LCCC contact professor and their students, working for a semester on an original script. For some students this is their first experience writing a script, this year there were more than one teenagers who had advanced past high school and were already beginning their college experience at LCCC.

For our part, Great Lakes holds a competition in early April, a panel of judges evaluate the work and choose winners who receive a cash prize, and traditionally the first place winner gets a staged reading performed by actors from our residency program.

This year we had a new partner in Daniel Cleary, who did an awesome job in bringing out good work from his student writers. There were several readings in class and revisions before the competition, and our judges were impressed by the work. As the assignment was to create ten minute lays (or something close to it) we decided to stage the first and second place winners, for an evening which was still something less than an hour, even following a post-performance talkback with the awarded playwrights.

Our acting company of five rehearsed for two hours prior to the performance, one hour per each fifteen-minute performance. You might think that is a lot of time, but it really isn't. What is required is to make what theater people like to call big choices, and by that I do not mean something like overacting, but starting out with something preconceived, and just going for it.

Walking through each piece, I would just stop the actors, give an opinion on what I thought was really happened, we'd go back a line or two and continue. Or I'd just say something that reinforced what was already going on, but make it more obvious. We had little set, few props, it was all about the words the students had written.

You walk into an empty space and hope that the process, that the afternoon and evening will be enjoyable. And the work moves smoothly, we had a record audience of over fifty - friends, family, fellow students - and each of these pieces were received very enthusiastically by the audience. They were each funny, but also affecting. They played even better than they read.

It is at times like this that I am (again) truly grateful for the professional company I keep. Young, enthusiastic, entirely "game" actors with little ego and a lot of focus. And on this night I also learned there are few things so joyful as learning a playwright - or two - is happy with the way you interpreted their work.