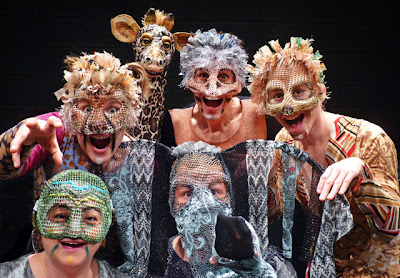 One year ago, during the Cleveland Public Theatre annual artists' meeting, artistic director Raymond Bobgan raised a very good question: What does the Cleveland theater community not already have, that it might benefit from? There were many interesting answers. Somebody suggested a children's theater.

Ali Garrigan was not the person who made that suggestion. However, she was the person who not only could not stop thinking about it, but who resolved virtually that moment to make it a reality.

She wasn't "stealing" any ideas from CPT, the whole point of a professional children's theater is exactly that, to be a theater whose sole mission is to produce works for the entertainment of a child audience, and CPT was not going to become that.

In 2007 when visiting my brother and his wife in the Twin Cities, they took us to the Children's Theatre Company in Minneapolis, where we saw an adaptation of Sally Wittman's A Special Trade. It was an eye-opening experience; the theater is in a wing of the Minneapolis Institute of the Arts, a charming, intimate space with a variety of seats that range from floor cushions, which get taller and taller as they move back row after row. "Big people" are instructed to sit in the back, where their charges can see them, but you know, out of the way. The performance is for the children.

The other major Ohio cities have them -- The Children's Theatre of Cincinnati, the Columbus Children's Theatre. Well, for the past twelve months, Ali has been working tirelessly to make this happen, and she has had enough experience working with theater start-ups (most of them mine) to know the right way to go about it, establishing an identity, a mission, raising funds, going non-profit and finding a permanent home first, before even opening a show.

Talespinner Children's Theatre officially opened this weekend, their inaugural production an original adaptation of the Bantu fable The Tale of the Name of the Tree. The family asked what I wanted to do for Father's Day, and that's where I said I wanted to go.

What we shared was remarkable, at once simply-told, and yet packed with energy. Five performers played all of the animals, and though the script was created by local artist Michael Sepesy, each actor (several of whom I am familiar with) seemed to have had the character written especially for them, as each animal tapped into some special talent uniquely their own.

The space is right downtown, off the Shoreway, in the Reinberger Auditorium in the West Side Ecumenical Ministry building at 52nd and Detroit. Even the space is special, at once appearing as a traditional, three-sided space, and yet with dimensions that make it feel intimate, close, homey, and with excellent sight lines for small people. How do I explain it, the action is so close, but not too close, if you follow me. That has a lot to do with the gentle, welcoming touch of the performers, and their director.

The Tale of the Name of the Tree continues Friday, Saturday and Sunday at 2 PM, with 7 PM evening performances on Fridays and Saturdays through July 8. If you have small children, you must go, it's absolutely delightful.
Posted by pengo at 10:10 PM

Email ThisBlogThis!Share to TwitterShare to FacebookShare to Pinterest
Labels: Alison Garrigan, children's theater, Reinberger Auditorium, Talespinner Children's Theatre, The Tale of the Name of the Tree