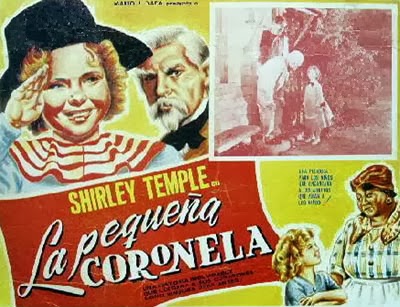 The story takes place just after the conclusion of the Civil War. A Southern "belle" marries a Northerner and is disowned by her father, a former Confederate Colonel, played by Lionel Barrymore. The couple moves West, has a daughter (Temple) and then separates. The mother returns home with her child, named after her grandfather - Lloyd.

Hattie McDaniel, in the only role she was ever allowed to play, acts as surrogate mother to the girl and explains her origins and in a nutshell, the war which continues to separate and confound our nutty little nation. Temple also tap dances with Bill "Bojangles" Robinson on some stairs in a clip you've probably had burned into your memory. I have no idea where I've seen it, I have never watched this movie, but it was probably used in a commercial in the 1970s or something.

In December, this was followed by The Littlest Rebel which takes a bad thing much too far. This number takes place during the Civil War, with Robinson now playing an actual slave, and not just a freed one. He remains darn cheerful.

The film includes a rather shameful scene where terrified enslaved people shiver in their boots at the impending arrival of the Yankees who will take them from their loving homes.

I found several advertisements in the Call & Post and even some feature items praising "Mr. Bojangles" including photos of him alongside Miss Temple. None of the advertisements I located in the Cleveland Press include any indication there even were any black people in this movie.