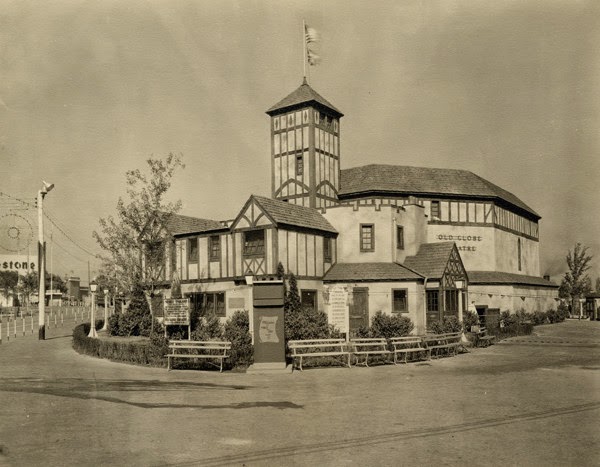 They built a little Globe Theatre for Shakespeare plays. The Great Lakes Exposition was about progress, about the future, about the world - it also had fan dancers and other kinks for daddy - and someone felt that Shakespeare had to be involved. That makes me happy.


About Some Players Who Give Us Shakespeare Just As We Like It
By Arthur Spaeth
The Cleveland News - July 2, 1936

We chose to imagine the Great Shakespeare’s spook being a bit puzzled and then downright worried through the centuries since his demise as the literati has carried on a campaign of refined ballyhoo, that has stuck the Bard up on a pedestal far from the common people.

But this brave little Globe theater company is doing its darndest to bring him back down to you and me - and doing it darned well.

“Julius Caesar” seems to lend itself better to the abbreviated production of the Globe than the other plays I have seen. The whole kernel of the play is present, and it moves swiftly and logically with no appearent loss in power trough the reduction of characters, words and scenes. The three phases of Caesar’s story life, death, burial, make for stirring melodrama in the Globe, and the great speeches, the spurring by Cassius, the apologies of Brutus, and the oration of Antony, are here and are delivered with power and fire.

I felt that Director Stevens had done remarkable work with the mob scenes. Although the “mobs” were not large, they were expertly coached and gave this production a good deal of its power and stirring qualities.

More than ever now do I urge a visit to the Old Globe.

Nearly 1,000 of the 25,975 persons attending the Great Lakes Exposition stopped in the Old Globe Theatre for a dose of synthetic culture.

There was plenty of slapstick and not a dull split second. You just started to laugh at Nick Bottom “roaring like any sucking dove” when he was squinting through Wall’s two fingers saying “I can hear my Thisbe’s face,” and Wall and the lovers fell in a heap and the lion had lost its tail.

The Shakespeare output in its formidable entirety has become forbiddingly synonymous with the obscure, the labored, the stilted, the rhetorical, the ponderous. All that, it nows appears, is out so far as interpretations given at the exposition are concerned. One result is that a considerable number of adults seem to enjoy taking their Shakespeare for its own sake rather than spend their time and money throwing baseballs at dolls.

The piper strikes up “Oranges and Lemons” on her recorder. Lads and lassies move to and fro in rustic weaving. Trumpeters sound a fanfare as Queen Elizabeth descends from her dias, escorted by her beefeaters, disappears into the theater. Once again the Town Crier waves a bell and hat in a flourish of red and green. And the play begins.