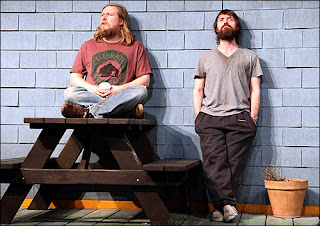 Annie Baker made my afternoon.

I hate plays. I hate them. I never liked plays. When I was a kid my parents would take me to the Play House, or Lakewood Little Theatre or Huntington or a touring show at the Hanna or something. I liked musicals, but I hated plays without songs. They were usually boring or at least entirely over my head. Even the comedies, because they were all written in the 1930s or supposed to take place in the 1930s and so I just didn’t get them at all.

I liked Jesus Christ Superstar and Annie and The Music Man. When my dad took me to the Palace to see Cats was the first time I ever saw a musical and thought, “Wait a minute, this show sucks. Is there something wrong with me?”

My junior year in high school our drama director chose a drama, not a comedy for the fall play. For some reason he cast me - instead of a senior. Seniors were always leads in the plays. There were a lot of pissed seniors that year. And I got a swelled head because it was a drama, and I was the lead (well, the male lead, the show is actually about the woman and her journey but screw that) and I got to learn how to appreciate a story that is told onstage and not only for laughs.


Because, and here’s the thing about plays, you have to repeat them. Over and over again. And it is the novelty of people saying the same words, live, night after night, that makes a play different from a movie, right? Not only the “just this one way, just this one time, just for you” aspect which makes it rewarding for the audience, but the we-will-recreate-one-moment-time AGAIN aspect of performance.

This makes sense when you are performing Oedipus. Or Hamlet. Or even Death of a Salesman (yes, I said it) because these are moments in time that are larger than life. THIS moment is the ONLY moment. And that is why it is important, and worthwhile.

But Bogosian’s Suburbia? No, I’m not getting that. This Is Our Youth? Hells, no. These are movie scripts. Do I say that because they are contemporary? Because the characters are uninteresting? Because nothing really happens, or at least, nothing of consequence? Not sure. But I can say that if a play has one set, which is the back of a business establishment, if there is a dumpster involved, I can pretty much assume I am going to check out over all the slacker-hipster-sarcastical-ironical that is about the hit me like a stiff, hot, dumpstery smell.

But I got my American Theater in the mail yesterday and if I have made one New Year’s resolution that I have not kept, it is that I will read every new play that appears in American Theater magazine. Somebody smoked a pack of cigarettes so I could resume my TCG membership and I really owe it to them.

So there’s Annie Baker on the cover and I’m thinking, “What’s Kate Nash doing on the cover of American Theater magazine?” No, I’m not thinking that, I’m thinking oh fuck that has to be this month’s playwright and she’s not Asian or my age or anything, I am going to hate this.

And then I see it has three guys in it and in the garbage area out back of a coffee house in Vermont and I’m thinking I am in for such pain.

Because, really, what is going to HAPPEN? THERE?

No, I am not going to say anything about what happens there in Ms. Baker's new play The Aliens. But something happens. And experiencing it on the page, I laughed - out loud, here on Coventry - and I cared, and I wanted to know what was going to happen next. Even though it mostly amounted to chatter, reading, some singing, tea-drinking, a lot of smoking and a few fireworks of the literal, someone-was-blowing-off-fireworks kind. Only not right there, off in the distance, because it was the Fourth.

Here’s a spoiler - no one gets beaten up. No one gets raped, with a screwdriver or anything else. People aren’t mean to each other. (The dumpster gets turned over - that part rocks.) But the playwright creates a moment in time that I would watch, and watch again. To feel that moment again, what it was like to be him. Or him. Or at least near him. To pay better attention, because maybe I missed something important the time before.

Because that is what makes a play worth doing, worth seeing, or worth writing.