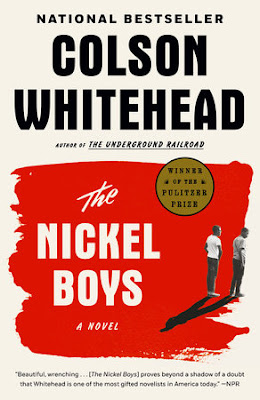 On Monday, the New York Times published an editorial in which Lucian K. Truscott IV, a journalist and (white) direct descendant of Thomas Jefferson proposed the third president’s memorial in Washington D.C. be demolished and replaced with one to Harriet Tubman.

My first reaction was, oh. But I like that one. My next was, who cares what I think? As Truscott points out, Monticello is monument enough. Even Jefferson himself did not think serving as President warranted mention on his own tombstone, who are we to argue?

Statues are coming down across America, and about time, too. We are supposed to be a nation established on ideals, and not individuals. Laws survive, and serve the people. Writing survives, the history remains. It's the hero worship that is being swept away.

It is at this moment, during a period of pandemic and social upheaval, that I read The Nickel Boys by Colson Whitehead. I’ve read two novels in this one vacation week, both released in 2019. The first grappled with the ripples of American Imperialism, the second with our nation’s as-yet unresolved sins of systemic racism. This one got the Pulitzer.

Inspired by the 2012 discovery of a secret cemetery on the grounds of the Arthur G. Dozier School for Boys in Marianna, Florida, Whitehead has done what he does so amazingly well, created a fictional story grounded solidly in undeniable (and accurate) truth.

It is a breathtaking tale, and by that I mean, I lost my breath. Halfway through the book I cried with something like, but not exactly like relief, and had to set the book down. And then, as with the Eggers book I read on Monday, I was whipsawed near the end and had to stop and regain my senses, to rethink everything that had come before.

“If everyone looked the other way, then everybody was in on it.” So believes the protagonist Elwood Curtis, and it is a belief he tries to hang onto. Taking a stand for justice even in the face of overwhelming and absolute injustice, a young African-American in the early 60s caught the wrong ride and ended up in a reform school where silence and complicity were necessary for survival.

Summer's not over. What shoud I read next?