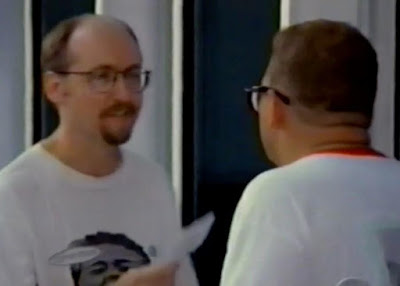 There was a time I wanted to be an actor. During the 1990s I was even attached to a talent agency in town, and did all the requisite things you do when you are represented by an agency. I had a composite photo, I had a voice reel. I spent a lot of money in an effort to promote myself, largely in vain.

There were a couple industrials, and by that I mean two. There was the greeting card shoot, a couple radio spots, and dozens and dozens of auditions.

The auditions were ridiculous, they would call lots of us in to pad out a reel to meet some quota the producer requested. Once I read for the pilot for a sit-com on a network. The part I was asked to read was obviously meant to be Asian American (it was the 90s, you could tell) but the agency had few people of color on their roster, it was a national call, and they needed to pad that reel.

One of the managers told me quite frankly that I probably wouldn’t get any work until my thirties, and by that he meant I was losing my hair. I was very glad, later, to have lost my hair, hair never worked for me, anyway. But the losing of it was troublesome.

In 1995, The Drew Carey Show premiered on ABC. Drew was a stand-up comic from the Old Brooklyn neighborhood of Cleveland, something he was and is always proud to mention. We met a couple times in the early 90s, after he broke big on The Tonight Show in 1991. My college roommate’s sister was friends with him, and brought him to see Guerrilla once. After the show he sat me down and gave me a critique of the performance which I did not appreciate at the time.

His sit-com was about working class Cleveland, but though the exteriors were Cleveland locations (the department store, the bar, his house) the whole thing was shot in L.A. There were two occasions when Drew brought the production to town; the opening credits sequence they filmed all over the city in 1997, and the episode about the gang sneaking into the season opener at the brand new Cleveland Browns Stadium in 1999.

News of the impending shoot spread through the community as press releases announced that there would be a massive call for extras to fill sections of Browns Stadium for the show and to be part of a long line for tickets at the box office outside the stadium. There were also calls for featured, non-speaking extras held through my agency.

Frankly, I was not interested. I had been an extra for a couple motion pictures shot in and around the Cleveland area (My Summer Story, House Arrest) and I did not feel that making seventy-five bucks a day to appear in the background of a crowd scene was a valuable use of my time.

However, I did receive a phone call from a different talent agency, a new talent agency, one that had just started business. They had gotten my name from someone at Playhouse Square. Apparently my agency was only sending reels and resumes of “print talent” (see: beautiful people) and the show was looking for ordinary-looking Clevelanders. Would I be available to audition for them, for this new agency? Sure. It’s always flattering to be asked.

They put me on video for my audition, handing me a small blue page of dialogue. They asked me to read three lines, which I thought was a pretty labor intensive way to cast the hundreds of people they were looking for, but fine. It was perhaps the most disinterested read I’d ever given in my life. 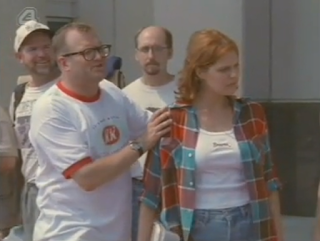 I got a call a couple days later. The guy said, rather enthusiastically, that I may have the part, and to make sure my calendar was clear for shooting. I said, "maybe," which was not the response he was expecting. He said he’d get back to me soon.

The next day I was told I had the part! "Great," I said. I told them I planned to be there. They pressed me, I had to be there, and I said, "Sure." I have it on my calendar. Again, I was as surprised by their enthusiasm as they were surprised by my not having any.

Then they asked if I still had the blue sheet. I said sure, and they reminded me to have those three lines memorized.

Wait. I am going to be speaking these lines? On the show, these are my lines? I have lines? Lines of dialogue?

Ah. Now it all made sense. I had just blithely sleepwalked through the audition process for an under-five role (as they say) on a nationally broadcast network sit-com.

Day of shooting, I arrived early at my trailer. Yes, I had a trailer. I never spent any time in it, as it was located well out of sight behind Browns Stadium (they took advantage of the thousands of people who arrived to join a line that stretched around the stadium in the opening aerial shot) and those of us who were contracted got to spent breaks in the new, air conditioned ground floor bar and grill while everyone else had the stand around in the ninety degree heat.

However, it did provide me a place to store the five outfits I had brought for the costumer to consider. I can’t remember what those were, I was wearing brown Chuck Taylors, late 90s high-waisted jeans, and a T-shirt featuring a smiling boy saying, “Cleveland! It’s fun!”

The costumer said what I had on was great, so that’s what I have on in the show.

My job was to stand in line in front of Drew and his friends. Spoiler alert, I ask to buy one ticket, and he makes fun of me for going to the game alone. So I buy five, which happen to be the last available tickets. Cue “Cleveland Rocks.” 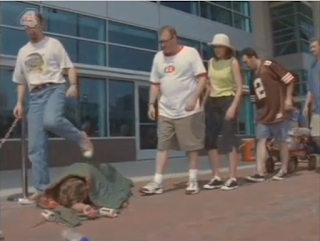 This meant I would be on-camera, next to Drew Carey, for the entire pre-credit sequence. And as we were shooting in sequence, and that it took several hours to get through two minutes of gags, I was able to pay close attention to how to act -- how to speak -- when being filmed for television. Because frankly, I could barely hear them. They were just talking so naturally.

I had a brief, personal, mental list of things I would not be doing. I would not attempt to be chummy with the gang; Drew, Ryan Stiles, Diedrich Bader, Christa Miller -- and Jenica Bergere, who, for the past several episodes, had been playing Drew’s girlfriend, Sharon. I would speak when spoken to, offer no suggestions, do what I was told.

Also, I would not fuck up. I had that little, blue sheet of paper in my pocket. I had my lines cold. There had been no rehearsal, I was obviously expected to just leap in, prepared, and that is what I would do.

In hindsight, maybe I should have been a little chummy. On the best of days I can appear imperious, aloof and distant, but that’s because I am terrified of saying something stupid, or worse, tedious. It would have been nice to introduce myself, but I was afraid of being rejected by the cool kids.

Early in the proceedings they asked a member of the line to get into a sleeping bag, one which we all stepped over. Boy, did I feel sorry for that guy. Not only did he spent the afternoon lying on the pavement in a down sleeping bag in the hot, hot sun, he was no longer able to tell his friends to watch for him. You can only see the top of his head and his arm.

When my turn came, they wired me with a mic (you can see the pack in the small of my back) and told me what marks to hit and when. And we just did it. Hit my mark, said my lines, didn’t fuck up.

While they set up for another take, I was just standing by the ticket window with Drew Carey. I wasn’t sure if small talk was in order. Throughout the day I had noticed how, though the episode had a director, Gerry Cohen, Drew was providing a great deal of the acting notes. After all, this was his show, It had his name on it. We’d just done one take, and no one said anything to me about how it went.

So I asked him, “Did you have any notes for me?”

“You?” he said, and did a little, dismissive headshake. “You’re fine.” 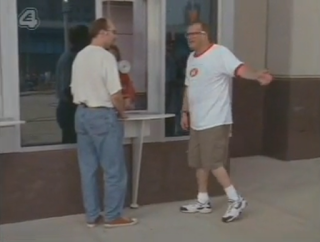 Then he leaned in and added, “Everyone who gets a walk-on role treats it like it’s the most important thing they’ve ever done. Just keep doing what you’re doing.”

We did another take. This time I looked over from the box office to see the other stars, Stiles, Bader, Miller, clustered by a large cement column, just watching.

Bader looked at me intently and deadpanned, “That was really good.”

In the moment I couldn’t tell if this was one of those situations where you say, “Really?!” And they respond,” Naaah.” So I just kind of shrugged and smiled.

Three takes, and that was it. Last shot of the day. The next day they would shoot all the scenes inside the stadium. Eleven thousand unpaid extras, or so they say. I went back to my trailer (I had my own trailer) picked up my things and went home.

By the time the episode aired it was late September, and I was excited. That day the Plain Dealer ran an article about the "most prominent of the local extras" to be featured on this most-anticipated episode of The Drew Carey Show … but it wasn’t me.

There’s a big reveal at the conclusion of the episode, in which Drew (and the entire stadium) spy Drew’s girlfriend Sharon on the “jumbotron” making out with another guy. That guy, played by Eric Matuschek was represented by my now-former agency, which had the wherewithal to contact the media about their star client.

Most prominent. He didn’t even have lines. You couldn’t even really see his face.

Ah, well. Since then this episode has been rebroadcast countless times in syndication. Every now and then someone new contacts me to say, “Was that you ..?”

I have performed on stage since I was fourteen, in some fifty productions, where my work has been seen by thousands of people. But millions watched me speak those three lines just on that premiere broadcast night, twenty years ago. Two minutes on national TV is my lasting legacy.