Play a Day: The Humans (BONUS)

Tonight the entire family took our seats at the Connor Palace to watch Stephen Karam's Pulitzer and Tony award winning play, The Humans.

For those visitors to this blog who are not from Cleveland, Playhouse Square is the largest performing arts center outside of New York City. Really, it's big and it's beautiful. The KeyBank Broadway Series has the largest subscriber base in the nation.

For years I was not a subscriber to the series, because I'm not a huge fan of musicals. Usually there are a half dozen musicals and one straight play. Last year, for example, that was the Broadway tour of The Curious Incident of the Dog in the Nighttime.

When it was announced that Hamilton was coming to Cleveland in 2018, like a lot of people I got my subscription the year before, so that when the 2017-18 season rolled around, I could easily renew and have decent seats for the big show.  In early 2016, it was far cheaper to get an entire season subscription than to travel to NYC just to see that one show ... and I have kids and they want to see that one show.

It also meant we have had the chance to see a lot of Broadway shows I probably would not have seen yet, including Fun Home, Something Rotten, Waitress, and the aforementioned Curious Dog.

It also means we have spent half a dozen evenings throughout the year stressfully trying to manage after school activities, wolfing dinner and squeezing into our seats by 7:30 PM. An evening at theater should be pleasurable, but not necessarily in the middle of the week.

Anyway, I've taken to creating box lunches for the twenty-minute car ride downtown. It's like taking the kids to the amusement park.

It is very odd to sit so high up in the balcony to watch a play. Today you also have to wonder, out of two thousand people in one vast space, who will leave their phone on. Who will cough. Who will just plain chat? These things happen. Put enough humans into a large enough space absolutely anything can happen. 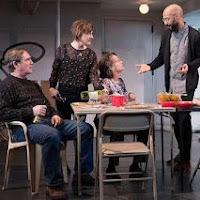 We were all on our best behavior, everyone was there to see an honest-to-God play. And I knew virtually nothing about this show. I did not even know the father would be played by Richard Thomas, so that was a bonus. Or that the mother would be performed Pamela Reed, who I remember so vividly from The Right Stuff. I love The Right Stuff.

There is a fear which lurks beneath the surface. It is white fear. The fear of regression. The lack of advancement. A young woman is having Thanksgiving at her new, first floor apartment on the Lower East Side. It is expansive for a Manhattan apartment, but to her parents it is a step back. Their ancestors left this place to make a better life elsewhere. The grandmother in attendance, who suffers from Alzheimer's, is a symbol this regression.

Loss of employment, not being able to find employment, chronic health problems, bad decisions which lead to loss of status. These fears, simmering below the surface. These are the fears and doubts of white people. I'm not being flip, or dismissive, I am white.  I know these fears.

They are going to lose the lake house. Oh dear. Not the same weight as being arrested for waiting while black. And though the daughter feels like a complete failure in her chosen profession, at least her boyfriend is a trust fund baby. But will he commit?

It is a deftly crafted script, tight, humorous and compelling. A revelation in the final beat, before the blackout (which had my twelve year old leaning into me in apprehension like he hasn't in a very long time) had me wanting to watch the entire play again, from the beginning.

It's those moments, when you learn something you didn't know, which retcons your understanding of your partner, of your life up until that point. Nothing makes sense, until suddenly it does. It can be horrifying, but there is relief in finally understanding.

"The Humans" by Stephen Karam continues at Playhouse Square through April 29, 2018.
Posted by pengo at 11:55 PM