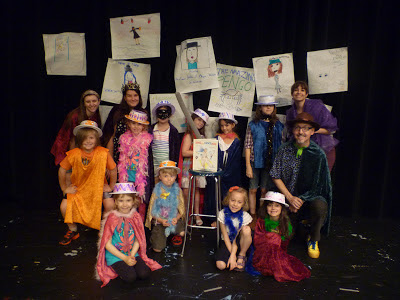 Since 2010, Great Lakes Theater has offered a summer arts camp, Camp Theater! Based at Berea High School, we conduct workshops with kids as young as four years-old, up through seniors in high school.

Since 2010, my daughter has been a camper and I have watched her move from my 6-to-8 year-old session to the bigger kids across the hall who work with Lisa and Tim. I'd say I miss her, but she helps so much in my class that I don't have a chance to!

The boy is attending for the first time. Not his thing, not really. Last fall when the School residency Program came to his school and worked his third grade class, he was that kid, the one who refused to wear a costume, would spin around in circles when everyone else was participating in a scene, and the one who was prime instigator and initiated every boypile.

He is much the same at camp, only not providing any obstruction, just asking everyone with a screen if he can use it. My laptop (no), his mother's Kindle (never again), Tim's iPhone (the man is too kind). Ah, well. We do not all want to be actors, and I respect that.

Next week, however, they will attending different camps -- she for music, he for sport. I will still be in Berea. I will miss driving them there and back, and I will miss their presence in the camp. It may make it easier for me to concentrate on the task at hand ... but that is also true at home, I guess, and I wouldn't have it any other way.
Posted by pengo at 9:25 PM