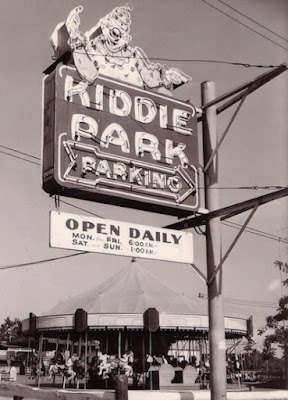 Memphis Kiddie Park at 10340 Memphis Avenue in Brooklyn (across the street from the Memphis Drive-In) opened on May 28, 1952. This tiny amusement park includes eleven rides, a concession stand and miniature golf. The first time a child of mine was invited there for a birthday party a few years ago (yes, it is still in operation) I was charmed by the atmosphere. It was sedate, not loud. Everyone was polite. I realized this was because there was no loud music playing, and because of the 50" and under designation for (almost) all of the rides, there was a complete absence of teenagers. 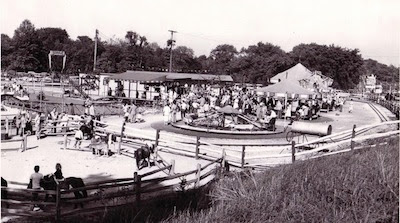 Adults can join the kids on the train which runs around the perimeter of the park, or on the Little Dipper, a steel roller coaster which holds the record for the longest continually operating roller coaster in the United States. It is also the most seriously uncomfortable joyride in the United States for anyone taller than 5'6". Big people can also accompany the small ones on the merry-go-round.

The very first time we visited, my son was just shy of two. He became enchanted by the Speedway and wanted to ride it again and again. So we held his third birthday party there. My folks came, and my father remarked that he'd always driven past this place, but never thought to bring his own kids there.


Sources:
Cleveland.com
Wikipedia
Posted by pengo at 12:35 AM