The panel itself went well. I felt a little stiff, but at least I was prepared, and providing equal time to each panelist, and between the four of us there was a wide variety of material to be discussed.

I had been invited to moderate this panel a few weeks ago, a few days before mother died. I said yes. I thought it was crazy, I was fairly certain her death would come very soon, did I have any business committing to an event I may need to cancel? Would I have time for this? Where would I be in my headspace in two weeks time? I said yes.

As it turned out, it was a good decision to have made. I would have regretted saying no. Ever since January 2017, when CPT first produced Entry Point, the weekend has been a creative oasis in the midst of a dark time.

That first year I acted in someone else’s work, my eleven year-old son attended and has strong, positive memories of the works he experienced there -- and he was there because the female-identified members of our family were in Washington, D.C., taking a stand for women’s rights. To paraphrase Emile M. Cioran, “A new play is a nation’s suicide, postponed.”

Shortly before the panel began this past Saturday, Molly Andrews-Hinders, CPT Artistic Associate, asked me how my Test Flight piece was coming along, which is to say my new script The Witches. Test Flight is in April, and rehearsals begin soon. It was a perfectly supportive question, we were catching up, it was not an inquisition. But for the briefest moment, I felt like the teacher had asked about my progress on a term paper that I had not yet started. 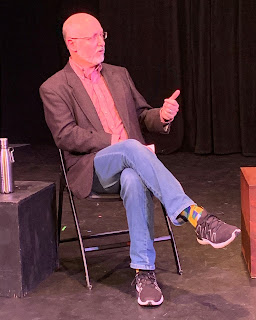 The truth is I haven’t written a word for The Witches since November. And I do not feel guilty about that. I had made a promise to myself to complete the first draft by the end of calendar 2019. Tragedy intervened, and I told myself to leave it on the shelf awhile or else I would go mad. It will be there when I am ready to return.

When I have two assignments looming it can be difficult to concentrate on either one. When I have three, I’ll just scroll Facebook for eight hours.

Sometimes I will procrastinate on the next thing due by writing the thing that is due later, which can be very helpful as when I finally do bear down on my immediate project, at least I know I’ve made headway into the next one.

This winter I have concentrated on the very next deadline, fully aware there was one final deadline to meet before I could think about spring. These included:
I have thought about my mother’s eulogy for months. Even before we knew she was dying. Yet by yesterday morning I had only jotted down a few phrases, and I woke with a hangover. I had one, painful morning to create a public declaration of who I believe my mother is. By 10 AM I was writing it. At 2:30 PM I was reading it. They tell me it was good.

Another deadline met, another promise kept.
Posted by pengo at 8:09 AM