Elvis at the Arena

November 23, 1956, Elvis played the Arena. One of these days I will document the Moondog Coronation Ball (1952) in some detail ... or at least spread more specious rumors. Regardless, the Arena was an all-purpose venue, the site where boxing legend Sugar Ray Robinson murdered Jimmy Doyle in the sixth (literally, as it turned out) and the Cleveland Barons played hockey.

On Halloween night, 1956, the Cleveland Newspaper Guild went on strike, bringing to an abrupt halt the publication of all three Cleveland papers -- the Press, News and Plain Dealer. At the top of his game, Elvis Presley storms into town. His first movie, Love Me Tender had opened a week earlier, and the theme song was on top of the charts. No. 2 that week was Don't Be Cruel.

There wasn't a single Cleveland paper covering the concert.

Well, there was one paper covering the event. The Black and Gold sent its star photographer, seventeen year-old Lew Allen to cover the concert. Yes, that's right -- the Heights High School newspaper. 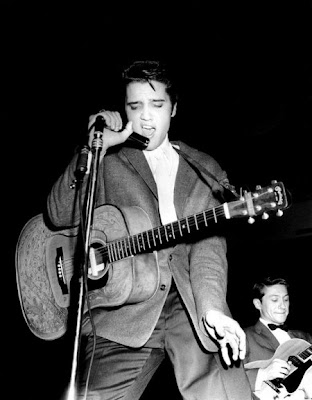 The show did not begin punctually at 8 PM that night as advertised. Excited fans were left waiting for fifteen minutes before Elvis took the stage. Legend has it he was receiving a phone call from a very ill and disappointed, ticket-holding girl who was in the hospital, and he just chatted with her for a while to try and make her feel better. Believe it or not, that's the story Lew Allen himself told, and has a picture of Elvis backstage on the phone as proof.

Allen went on to study photography at the Rochester Institute of Art, and went on a rock and roll tour in 1958, take great photographs of Buddy Holly, the Everly Brothers, Frankie Avalon, Duane Eddy, Bobby Darin, the Hollywood Flames and others.

The Cleveland Arena and Elvis Presley were demolished in 1977. 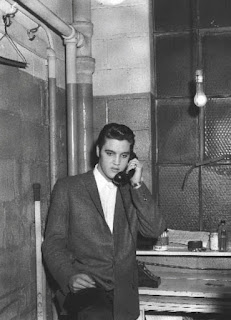