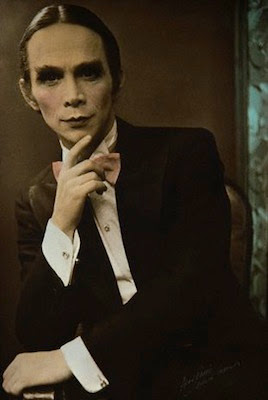 Joel David Katz (b. April 11, 1932) was born and raised in Cleveland Heights, Heights High Class of '50. His father, Mickey Katz was a successful musician in a comical vein, performing for a time with Spike Jones. Joel got an early start in show business, performing the role of Pud in On Borrowed Time at Cleveland Play House at the age of 9. After graduating high school, he began a career in New York City under the name Joel Grey.

The role that has defined his career is that of the Emcee in the original 1966 Broadway production of Cabaret and the 1972 film version, for which he won a Tony and an Oscar for his performances. Grey returned to the role in 1987 for a Broadway revival.

Based on Christopher Isherwood's "semi-autobiographical" novel Goodbye to Berlin, which details his experiences in the Weimar Republic, Kander and Ebb's Cabaret long ago entered the kind of American pantheon of musicals which can safely be produced in high schools. My best friend from college performed the role of Emcee at Beachwood High in the mid-1980s. The most chilling moment of that production was the final image of the Emcee himself raising his hand in the Nazi salute ... with a swastika painted onto his palm, as if anyone in the room missed the point.

In 1993 Sam Mendes re-imagined the production for a new century, transforming the Emcee from Grey's androgynous elf into Alan Cumming's powerfully gay rentboy. Instead of a cheekily naughty dancehall, the Kit Kat Club was now a dangerous lair of sex and drugs. Berlin then, as always, is where you dance as fast as you can.

My girlfriend (at that time) and I visited New York City in 1998, another point is history where we were all feckless and gay, and when Nazis were again about to take power. A friend was swinging through Cleveland from Detroit and offered a ride, and so I got to enjoy the New York Times in its entirety, which that day happened to include the entire Starr Report. What the fuck was happening?

Mendes' Cabaret was in the midst of its hugely successful run on Broadway, Natasha Richardson had moved on and on the date in question Alan Cummings had excused himself from the matinee. No matter, the show was rock-solid with understudy Vance Avery in as the Emcee and replacement lead Jennifer Jason Leigh as Sally Bowles. Do not cry for me, I adore the JJL.

The devastation at the end of the show, however, is complete and left my date and I to squint in the late afternoon sun as we made our way to the Algonquin to have a few too many martinis. I spent a trying evening consoling her as the gin and the Holocaust and Van Gogh and Kenneth Starr reduced my partner into a howling mass of sad. The next morning we took a hungover bus ride all the way Uptown to Fort Tryon Park where I asked her to marry me.

This weekend the wife and I are going to see Cabaret when it opens this Saturday night at Great Lakes Theater. Wish us luck.