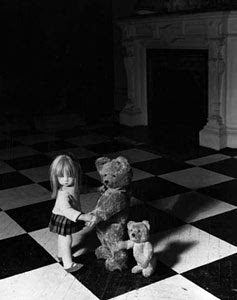 ... and speaking of children's books featuring black and white photographs of stuffed bears in real-world settings ...

Born in Canada in 1914, Dare Wright spent most of her formative years in Cleveland. Her parents were separated when she was a child. Her older brother Blaine lived with their alcoholic, theater critic father, while she lived with her mother, professional portrait painter Edith Stevenson Wright.

Settling in Cleveland in 1919, and after a few living arrangements based upon the kindness of strangers, the independent painter and her young daughter found their own apartment in Cleveland Heights in 1921. She was commissioned to paint lawyers, judges, politicians - and finally received the favor of the Hanna family. She painted a posthumous portrait of Marcus Bales Hanna, and later his son, Daniel Sr. owner of the Cleveland Leader, and later the News. They lavished her with connections and attention, granting her studio space in the Hanna Building.

I work in the Hanna Building. Crazy.

Dare went to Coventry Elementary School, and by fourth grade a boarder at Laurel School. Biographer Jean Nathan in her book The Secret Life of The Lonely Doll suggests that her life of impermanence coupled with her mother's focus on the superficial (because, you know, she was a painter) was a major factor in shaping Dare's deep-seated sorrow regarding connection with actual people, and her tendency to render inanimate objects with personality and as a repository for her fantasies of love and acceptance.

If Dare were raised by her successful, aloof, artist father and had an ne'er-do-well mother who drank a lot, it would still be called the mother's fault for Dare's becoming a glamorous, disaffected freak, because that is how we look at things.

Edith's success grew. She painted Calvin Coolidge's portrait in 1928 and it was hung in Public Hall, where he had received his party's nomination in 1924. In 1935 a cigarette caused a fire in Public Hall and the portrait was destroyed.

Graduating from Laurel in 1933 (top five in her class) Dare moved to New York and discovered the brother she had never known. Her journeys took her from there to Hollywood (where she failed to become an actress) back to Cleveland and to New York, eventually establishing herself as a stunning, stylish model for fashion magazines.

She became a photographer, and was equally accomplished in front of and behind the camera. In 1957 she created her legendary children's book, The Lonely Doll featuring Edie, a felt Lenci Doll from her own childhood, named after her mother. In the story this most lonely of dolls is visited by Mr. Bear and Little Bear (stand-ins, of course, for her absent father and brother) and after a tentative period of discovery and tests of trust, the trio is bonded forever and will never be apart again.

The Lonely Doll disappeared in obscurity - but remained a strong, psychic presence in the mind of many baby boomer aged children, and eventually returned to print in 1998. We have a copy. My daughter's middle name is Dare.

Sources:
Wikipedia
The Secret Life of the Lonely Doll
This American Life
Posted by pengo at 11:31 PM