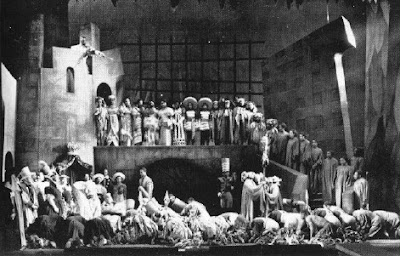 The Negro Theatre Unit of the Federal Theatre Project featured a “Contemporary” branch and a “Classical” branch. Inarguably the greatest success of the Classical branch was its production of Macbeth, commonly referred to as “Voodoo” Macbeth.

This production, featuring an all-African-American cast, was directed by Orson Welles, and set his national career as a stage director. Citizen Kane still five years away. Welles was already a known star as a voice for radio, having established himself as the original Shadow. When Macbeth debuted on April 14, Welles was 20 years-old.

In 1937 Welles would direct what should be referred to as “Fascist” Julius Caesar, creating a Mussolini-type Caesar in a modern-dress production that starred himself as Brutus. For this work, his thinking went that as long as the task at hand were to create a large-scale Shakespearean drama featuring an all-black cast, it would be more acceptable to a modern audience to see this supernatural, blood-soaked tragedy set in a place like Haiti rather than Scotland. The actual setting is undefined, but the design strongly suggests the Caribbean.

There was controversy during the rehearsal process, and picketing. Many in the African-American community feared this would be a burlesque of some kind. When the production opened, and all could see that it was by all modern measure a legitimate presentation of Shakespeare’s work, and grand and exceptional, such criticism disappeared.

Hecate’s role, often cut from modern productions, was expanded. He was a cast as a large man with a whip, and delivers the final line of the production - The charm’s wound up. (In Shakespeare’s text, from Act I.) Professional African drummers were employed, but only five of the cast of over 100 were professionally experienced actors. However, this was often the case for Federal Theater Project productions.

Following a highly successful run in New York, the play went on tour. Referred to in an advance piece in the Plain Dealer as “bizarre” the show came to Cleveland in Fall, 1936.

Source: Wikipedia, Cleveland News, The Plain Dealer
Posted by pengo at 12:00 AM