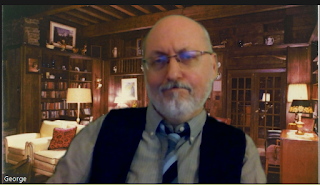 The past two weekends some friends have been meeting on Zoom to read Edarwad Albee's Who's Afraid of Virginia Woolf.
There has been a running gag among the actor-teachers that someday Lisa and I should play Martha and George, and so we did. We made it a drinking game.
Drink whenever:
DO NOT TRY THIS AT HOME. You will die.
This will probably be the only time I have the opportunity to channel the person of George, and it was a pleasure. I was particualrly inspired by the perfomance Bill Irwin gave, almost fifteen years ago and which I was fortunate enough to catch in the West End.
At that time I made note of it in the blog I kept for performances of I Hate This, which, in addition to visiting my brother's family, was another reason I was in London at that time. I was struck at that time about the theme of childlessness.
Here are my thoughts from the time, note the appearance of a young David Harbour who has since achieved fame as Sheriff Hopper in Stranger Things.
I Hate This Blog: March 30, 2006
After a quick meal of fish and chips, Henrik and I took off to see the recent revival of "Who's Afraid of Virginia Woolf" with Bill Irwin and Kathleen Turner at the Apollo. Okay, not British, not the playwright, not the actors, but who cares? Couldn't see it in New York, thrilled to be able to see it in London. Besides, Henrik has never seen or read it, ever, so I knew it would be a kick for him.

It is as good as they say. I was on my guard for an understudy notice to be up when we arrived, but it wasn't. I knew the entire cast had gotten nominated for Tonys. Henrik tells me Ms. Turner missed a few performances a month ago, and when she opened her mouth last night I almost wished for her sake she'd taken the night off, her classic, dusky voice just sounded very, very tired. Big, but tired.

The event began a bit symbolically, as we took our seats, the folks from Chicago sitting next to us were being harangued by a red-headed drunk. Apparently he had been sitting on one side of them, and then the actual owner of that seat arrived, and then he had been in our seat, on the other side. He started talking to them politely, and then got loud and insulting, "You Americans think you're big shots, but your just fucking middle class," and like that. There were about a dozen people gesticulating wildly at the ushers and he was eventually escorted out.

Our aisle mates and we chatted for a bit, Henrik reporting that was the first time he had ever seen something like that happen in a dozen years of British theater-going. We concluded being verbally assaulted by an alcoholic wasn't exactly an inappropriate way to begin that night's performance.

I was probably supposed to read Edward Albee's "Who's Afraid of Virginia Woolf?" in college, but I didn't. I know I haven't seen the Mike Nichols film, and some say that's for the best. In any case, the only other time I've seen it was (surprise) at Great Lakes Theater Festival, about ten years ago. I really enjoyed that production. In fact, having never even read it before, I was shocked at how great the first act was, and equally amused to hear another audience member heading for the lobby during the first intermission saying loudly, "This is terrible, there's nothing to like about any of these people!" Great drama, very funny, and it was still pissing people off after 35 years! That's theater.

What I did not get ten years ago was the whole "no son" thing. Thought it was symbolic. Maybe there was a son, but he's gay or something so they don't want to talk about him. Or it was just a game. The kind of game that people don't want to have children play, those kinds of people. Intellectuals.

NICK: (to George, quietly) You couldn't have ... any?
GEORGE: We couldn't.
MARTHA: (a hint of communion in this) We couldn't.

What I did not know at that time was that means trying to have children. A lot. Hoping for children. Having miscarriages, maybe a lot of them. Stillbirths. Not so simple.

The play takes place on the advent of the 21st birthday of this imaginary son. A private ritual, George and Martha make up a life for their son, and on this night she breaks the rules and tells someone else. And on this night, George kills him. It's over. He's dead.

So he was never imaginary. Was there a boy? A small boy, a stillborn boy, or a boy who died shortly after birth? He was real.

"There's nothing to like about any of these people." Maybe not. It's ugly in its hysterical-ness. It's a play about failure, so many different kinds of failure, for everyone in the room. The younger couple have much in common with the older one. Nick and Honey can't have children, either. Hmn. Another take on the word "hysterical."

The performances were uniformly brilliant, but I simply adored Bill Irwin. A monument to passive aggression. But I was also struck by Mireille Enos' Honey. Never gave her character much notice before, I think I had the least sympathy for her in the past. But she was heartbreaking. Oh yes, mousy and yet so, so sympathetic. So vulnerable.